Esri’s ArcGIS Living Atlas of the World is a collection of geographic information from around the world, including maps, apps and data layers. The World Imagery map of Living Atlas uses Maxar’s Vivid and Metro imagery mosaic products, which include some of the highest resolution, most accurate and visually consistent global image mosaics available on the market and updated annually. 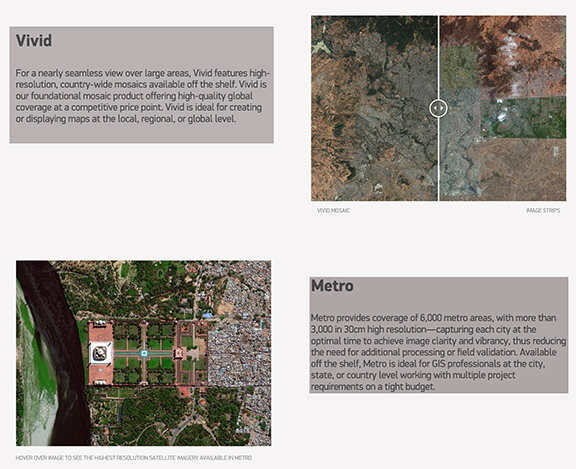 As part of Maxar’s continued efforts to innovate and enhance its products, Esri will receive a new version of Vivid that more than doubles the horizontal accuracy of imagery pixels, thus making the vector features extracted by ArcGIS creators even more precise.

Esri’s contract includes up to 1,000 of Maxar’s 6,000 Metro imagery mosaics that provide global, off-the-shelf access to recent imagery of specific cities. ArcGIS end users will also have access to Maxar’s NaturalVue ® 2.0 image mosaic and National Urban Change Indicator (NUCI) through the Living Atlas Catalog, which was announced earlier this year.

Maxar’s new image mosaic layers will be made available to ArcGIS users continuously within Esri’s Living Atlas throughout the next three years of this extended agreement. Come and see Vivid and Metro in action at Maxar’s stand #627 at the Esri User Conference in San Diego, California, from July 8-12, 2019.

Tony Frazier, Maxar’s EVP of Global Field Operations, said that over the last decade, Maxar and Esri have partnered to combine the best commercial satellite imagery with the most advanced geospatial tools on the market within a unified experience. This latest contract demonstrates both companies’ enduring commitment to innovation for Esri end users and the global GIS community.

Richard Cooke, Esri’s Director of Global Remote Sensing & Imagery, added that Maxar’s dedication to creating high-quality products allows the company to continue offering ArcGIS users better and better satellite imagery for their analysis. The improved horizontal accuracy of Vivid and continuous updates to Metro allow the Esri community to improve the certainty of their work and increase the confidence in their decision-making.