Now Fully Engaged at 47.5 Degrees West is the SES-14 Satellite

The all-electric satellite, which has C- and Ku-band wide-beam coverage and Ku-band high throughput spot beam coverage, is SES's second hybrid satellite to serve the Americas, with the first being SES-15. 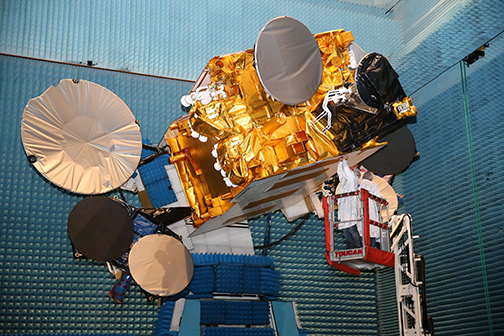 Photo of the SES-14 satellite.

Image is courtesy of Airbus.

SES-14's C- and Ku-band wide beams and high throughput capabilities are serving various markets. The satellite is expanding the reach of SES’s second cable neighborhood in Latin America, and provides new capacity for DTH services. The satellite is also delivering more high-speed connectivity to the dynamic aeronautical market and other traffic-intensive applications in the maritime and cellular backhaul markets.

The satellite also carries a hosted payload for NASA’s Global-scale Observations of the Limb and Disk (GOLD) mission. GOLD will provide unprecedented imaging of the Earth’s upper atmosphere from geostationary orbit to deepen scientists' understanding of the boundary between Earth and space.

SES-14 at 47.5 degrees West is replacing and augmenting services currently provided on NSS-806. The license to operate at this Brazilian orbital location was the result of SES’s successful participation in a spectrum auction in 2014. SES-14 was launched on an Ariane 5 rocket from the Guiana Space Centre in Kourou, French Guiana. SES-14 was built by Airbus Defence and Space and is an all-electric satellite. The satellite also features a Digital Transparent Processor (DTP), which increases payload flexibility and will provide customized connectivity solutions to SES's customers.

Martin Halliwell, Chief Technology Officer at SES, said that thanks to the Airbus, Arianespace and SES teams, SES-14 is able to fulfill its planned satellite mission of bringing better picture quality TV content to people across Latin America, as well as delivering high-speed broadband services to airline passengers flying over the Americas and North Atlantic routes. Enterprises and communities within the region will also be able to access the reliable connectivity provided by SES-14. SES-14 is key to SES's future growth trajectory and is part of our ongoing strategy to develop innovative capabilities for specific and growing markets.