Arianespace... What A Load Of Bi-Propellants (Launch)

[SatNews] Europe’s MSG-3 meteorological satellite is being fueled at the Spaceport in French Guiana...

...as preparations continue for launch on Arianespace’s upcoming Ariane 5 mission—which is scheduled for liftoff on July 5, along with the EchoStar XVII telecommunications relay platform as its co-passenger. During activity in the Spaceport’s S5 payload preparation facility this week, MSG-3’s tanks are being loaded with MMH (monomethylhydrazine) fuel and MON (mixed oxides of nitrogen) oxidizer for the satellite’s bi-propellant propulsion system. The loading of MON is performed first, conducted by specialized personnel in suits called the SCAPE (Self Contained Atmospheric Protective Ensemble). MSG-3’s two oxidizer tanks are filled with 601.5 kg. of MON during a two-day period. 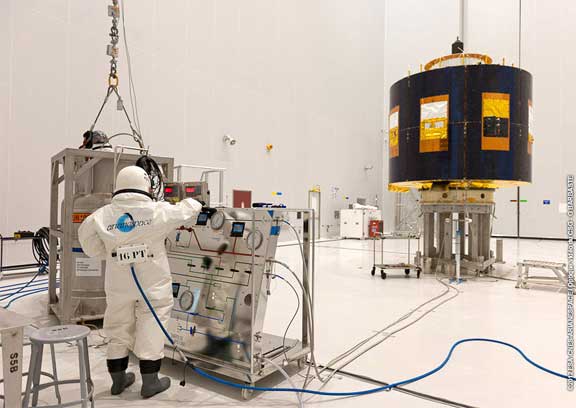 Loading of MON (mixed oxides of nitrogen) for MSG-3’s bi-propellant system is shown in the S5B integration and fueling hall of the Spaceport’s S5 payload preparation facility. Photo courtesy of Arianespace.

Arianespace’s launch of MSG-3 on its next dual-payload Ariane 5 mission will ensure continuity of satellite-based weather observations from geostationary orbit at 36,000 km. above the Earth. The spacecraft is to be operated by EUMETSAT (the European Organisation for the Exploitation of Meteorological Satellites). MSG-3 will be the no. 3 spacecraft in Europe’s second-generation MSG series, following the two previously orbited by Arianespace: MSG-1 in August 2002 (which was re-designated Meteosat-8 when it became operational); and MSG-2 in December 2005 (renamed Meteosat-9 upon reaching operational service).

Ariane 5’s orbiting of MSG-3 is timed for a smooth transition from Meteosat-8, which has greatly exceeded its expected in-orbit lifetime. The MSG satellite series results from a successful cooperation in which the European Space Agency develops these satellites according to EUMETSAT’s requirements and procures recurrent units on the latter’s behalf from Europe’s space industry. EUMETSAT has responsibility for defining the payload to meet user needs, procuring the launchers and ground segment, and operating the system. All MSG-series satellites are produced by a Thales Alenia Space-led European consortium.