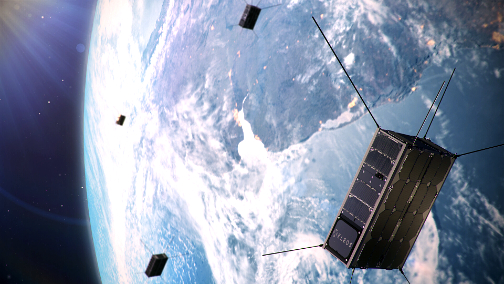 Artistic rendition of Kleos Scouting Mission satellites on orbit. Image is courtesy of the company.

McKay is joint qualified with several years of experience in resource management, legislative affairs, as well as an extended deployment to Afghanistan in support of the joint service and coalition build-up of the Afghan National Army. Mr. McKay will engage with a large network of defense specialists in the US Air Force and Saudi Arabia.

Karyn Hayes-Ryan, Kleos Space Inc. Director said that Sean joins the Kleos team at a time of international crisis, where governments are acutely aware of the need for enhanced border security. The company has seen an increasing interest in Kleos’ data offerings and he is well equipped to develop business opportunities in the US and Saudi Arabia.

The Kleos Scouting Mission satellites are in Chennai, India, awaiting launch on Indian Space Research Organisation (ISRO) PSLV C49. The multi-satellite Scouting Mission system will form the foundation of a constellation that delivers a global picture of hidden maritime activity, enhancing the intelligence capability of government and commercial entities when AIS (Automatic Identification System) is defeated, imagery is unclear, or targets are out of patrol range. The first scouting mission is comprised of 4 smallsats that are flown in formation.