[SatNews] The absence of gravity presents a significant challenge for precision robotic maneuvering and operations in space.

Overcoming some of that challenge may be possible through the development of computer algorithms to simultaneously compensate for this limitation while directing precision operations. Such algorithms could benefit a variety of space activities, including DARPA’s Phoenix program. A primary goal of Phoenix is to develop and demonstrate technologies to cooperatively harvest and re-use valuable components from retired, nonworking satellites in geosynchronous orbit.

DARPA’s InSPIRE program (International Space Station SPHERES Integrated Research Experiments), is sponsoring the Zero Robotics Autonomous Space Capture Challenge to develop such algorithms. The challenge, which kicks off March 28, asks individuals and teams of programmers from around the world to develop a fuel-optimal control algorithm. The algorithm must enable a satellite to accomplish a feat that’s very difficult to do autonomously: capture a space object that’s tumbling, spinning or moving in the opposite direction. 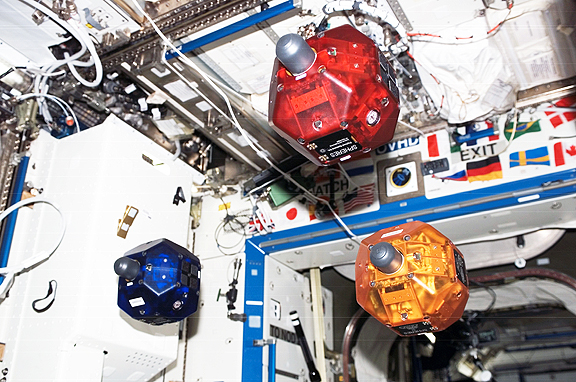 SPHERES within the ISS

During four, weeklong computer-based rounds, challenge participants will collaborate via the Zero Robotics Website to create a computer algorithm that will be programmed into bowling-ball sized satellites called SPHERES (short for Synchronized Position, Hold, Engage, and Reorient Experimental Satellites) aboard the International Space Station (ISS). An object, simulating a Phoenix payload on-orbit delivery system, will be set in motion inside the ISS under varying conditions, such as tumbling or spinning. The algorithm developed will need to direct the SPHERES satellite to approach the moving object and orient itself to contact with the object via Velcro on the SPHERES satellites.

“If a programming team can solve this challenge of autonomous space object capture, it could not only benefit the Phoenix program directly but potentially any space servicing system in the future,” said Dave Barnhart, DARPA program manager.

The winners of each round will be invited to the Massachusetts Institute of Technology (MIT) to view the finals via videolink from the ISS, where the four algorithms will be programmed into SPHERES and tested. Zero Robotics is co-sponsored by NASA and is run by the Massachusetts Institute of Technology’s (MIT) Space Systems Laboratory to engage U.S. middle and high school students in science, technology, engineering and mathematics (STEM). The Autonomous Space Capture Challenge is a new extension to Zero Robotics, opening up the competition to students from all levels of education and the general public as well. For official rules and eligibility, click here.