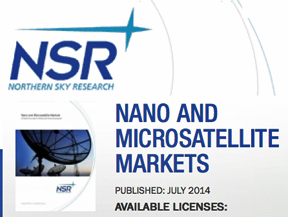 In 2013, this nascent market surged into view with a trebling of total launches compared to 2012, and this higher launch rate will be sustained through the remainder of the decade and beyond. Opportunities exist to use nano/micro satellites both as a complement to existing GEO assets and as independent missions. "Originally a platform for university and technology development projects, NSR is now seeing interest from the commercial, government, and military sectors in using 1-50kg satellites operationally," explains NSR Analyst and report author Carolyn Belle. "Operators who had been waiting for these platforms to demonstrate reliability and sufficient capabilities are now beginning to build satellites and deliver services in Earth Observation, Science, and Tracking/AIS. Because they are so cheap and fast to build, 1-50kg satellites can rapidly address changing needs and new opportunities with little risk to the operator. NSR forecasts that Earth Observation will experience the most growth, largely driven by commercial and military constellations."

The low cost per unit of these satellites facilitates the creation of constellations; operators will use the high revisit rate provided by constellations as compensation for low spatial resolution, less precise measurements, or fewer instruments per satellite. Constellations will be a dominant element in the 1-50kg market over the next 10 years, a trend that has already begun to manifest.

Despite growing capabilities and demand for nano/micro satellites, NSR finds that the market will continue to be restrained by limited launch opportunities. Whether operators are most impacted by the minimal control regarding orbit, schedule, or risks of a rideshare launch model, more diverse offerings in the launch market are required to address nano/micro satellite operator needs. Fortunately, heightened demand for launch slots and the promise of continued demand due to rapid constellation replacement cycles means that the time is right for one of the many dedicated nano/micro satellite launcher projects to finally reach fruition.