Thales Alenia Space won a contract from the European Space Agency (ESA) for the Phase A study of LISA (Laser Interferometer Space Antenna), the third “large-class” mission in ESA's Cosmic Vision 2015-25 Program. LISA will consist of three spacecraft in a triangular formation, separated by 2.5 million kilometers, following the Earth in its orbit around the Sun. Each satellite will carry two reference masses. Laser beams will be transmitted between satellites to measure the displacement of these masses with a resolution 10 times smaller than an atom. 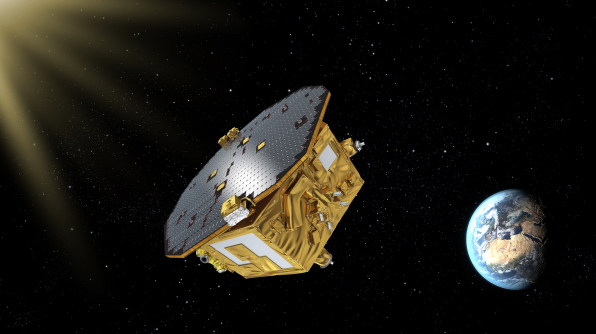 LISA will be the first space-based gravitational wave observatory. Its major aim is the detection of gravitational waves, ripples in the fabric of space-time created by large and dense celestial bodies with very strong gravity — such as black holes — that move with accelerated motion, as predicted by Albert Einstein's theory of general relativity. The mission will give scientists a completely new view of the cosmos compared with traditional observation techniques, and will hopefully help unveil some of its many mysteries.

Technical details Phase A includes the identification of a feasible mission design, the definition of a baseline for the spacecraft and its subsystems, including payload interfaces, the evaluation of achievable science based on extensive analyses, and the definition of a development road map.

LISA (Laser Interferometer Space Antenna) will use the same technique as two other programs, LIGO (Laser Interferometer Gravitational-Wave Observatory) and Virgo (European Gravitational Observatory), to detect gravitational waves, namely measuring the displacement of reference masses using laser interferometry. But it will extend the observation envelope in the lower frequency spectrum, inaccessible from the ground, and considerably enhance capabilities and verification.

Thales Alenia Space is a joint venture between Thales (67 percent) and Leonardo (33 percent), Thales Alenia Space also teams up with Telespazio to form the parent companies’ Space Alliance, which offers a complete range of services and solutions.