A new class of visa and the establishment of the Australian Space Agency headquarters in Adelaide is generating national and global interest in an incubator program for space industry startups.

According to journalist Andrew Spence of The Lead, South Australian space incubator, Venture Catalyst Space, began working with its first five companies in September 2018. But the growth and national focus of the space industry in Adelaide is leading to heightened competition for places in the second round, which begins later this year. 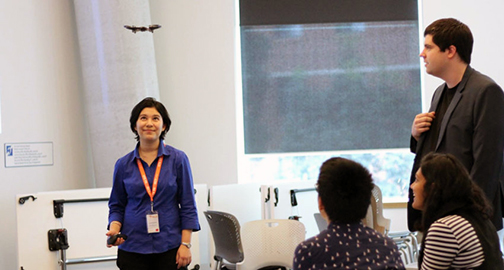 In December, the Australian Government announced the newly-formed Australian Space Agency would be based in Adelaide, cementing South Australia’s position as an epicenter of the space industry. Applications for the second intake of the Venture Catalyst Space program opened last month and the ICC has already fielded inquiries from India, Pakistan, the Philippines, Singapore, Germany and Vietnam. Applications, which close in April, are also expected from startups in other states within Australia.

Innovation & Collaboration Centre Director Jasmine Vreugdenburg said the new visa and the announcement of the national space agency being headquartered in Adelaide were important for the incubator’s growth. “We’ve had quite a few inquiries from India and a number of local inquiries as well from existing organisations that have projects they want to start working on,” she said. "Having the space agency headquartered here is pretty significant because it does put the spotlight on Adelaide and it does show we have got a large amount of capability in South Australia that we are trying to build on. It also puts a spotlight on the research the University of South Australia is doing through its Institute of Telecommunications Research, which is where Myriota and Cohda Wireless were spun out of.”

South Australia has been a significant player in the nation’s space industry and is home to major Tier 1 defence companies and several emerging space start-ups, including Fleet Space Technologies and Myriota, which have both announced new IoT initiatives in the past week. Last December, Southern Launch also announced it would establish a launch facility on Eyre Peninsula, in the state’s north.

Vreugdenburg said many of the concepts being generated by space startups locally were applications that used satellite data to improve intelligence across a number of industries. “At the moment it’s all about looking at how we can get more data using technologies from space but there’s definitely room now to look at other areas like SSA (Space Situational Awareness) and geospatial,” she said. “Traditionally a lot of the technologies came from defence so having a huge [Tier 1 Prime] base here is giving us the advantage.”

The new national agency will be housed at Lot Fourteen, a former hospital site that is being transformed into a entrepreneur and defence hub, and will now fall within the Australian government’s City Deal scheme to drive long-term investment in the Adelaide CBD. The six-month Venture Catalyst Space program includes business builder workshops, mentoring, access to a global network of expert advisers, office space, meeting rooms and high speed internet in the ICC, a stipend of $6k per company and the chance to pitch for a sponsored overseas trip to meet investors, customers and experience the global startup community.

Startup Tekuma relocated from Sydney to Adelaide last year to be part of the inaugural program. Tekuma’s flagship product is a controller (pictured below) for drones and robots that allows the user to operate the drone with one hand, freeing up the other hand to control the peripheral such as a camera. Tekuma co-founder Annette McCelland said the Venture Catalyst Space program had not only provided office space, a stipend to help relocate and access to like-minded people both within and outside the program but it had also enabled an introduction to Defence SA, which had in turn led to many valuable connections with the local industry. “Since coming to Adelaide we’ve been making headway particularly with the defence industry here and it looks like there could be some positive collaborations happening this year as well as continuing our other avenues for selling into robots and underwater rovers,” McLelland said. “The space agency is going to bring more jobs and more money to South Australia – we definitely like Adelaide so far and we’re planning to stay here beyond the program. Hopefully we’ll be able to move into Lot Fourteen at some point.”

Applications for Venture Catalyst Space are open until April 26.