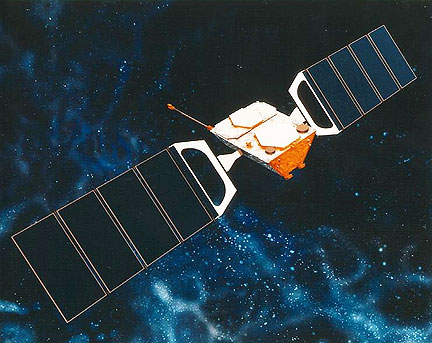 Artistic rendition of a Globalstar satellite
Globalstar expects to take delivery of four additional satellites in early 2011 and all six satellites will then be shipped to the Baikonur Cosmodrome in Kazakhstan. There, they will undergo preparations and testing for launch using the highly reliable Soyuz launch vehicle. In October, Globalstar successfully launched six new second-generation satellites using the Soyuz.

Globalstar signed a contract with satellite manufacturer Thales Alenia Space in late 2006 for the design, manufacture, and delivery of its 2G constellation satellites. In 2007, Globalstar contracted with launch services provider Arianespace for a total of four launches of six satellites each using the Soyuz. Globalstar plans to integrate the 24 new second-generation satellites with the eight first-generation satellites that were launched in 2007, to form a 32 satellite constellation. The new satellites are designed to support Globalstar's current lineup of voice, Duplex and Simplex data products and services including the Company's lineup of SPOT retail consumer products. The advanced constellation combined with the Company's next-generation ground network, expected to be installed by 2012, is designed to provide Globalstar customers with enhanced future services featuring increased data speeds of up to 256 kbps in a flexible Internet protocol multimedia subsystem (IMS) configuration. Products and services supported are expected to include: push-to-talk and multicasting, advanced messaging capabilities such as multimedia messaging or MMS, geo-location services, multi-band and multi-mode handsets, and data devices with GPS integration.