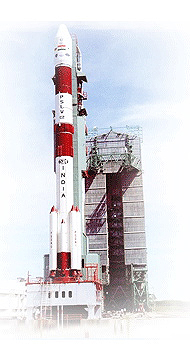 The ISRO's Polar Satellite Launch Vehicle
[SatNews] Indian Space Research Organisation (ISRO) will put place into orbit the latest remote sensing satellite CARTOSAT-2B, along with four smaller satellites (ALSAT-2A of Algeria, AISSAT-1 of Canada, TISSAT-1 of Switzerland and STUDSAT of India), on Monday, July 12th. The satellites will be put into orbit by PSLV-C15, the 17th flight of India’s Polar Satellite Launch Vehicle.

The PSLV-C15 will be launched from the Satish Dhawan Space Centre in Sriharikota, at 9.22 a.m. on Monday, July 12. “The 694-kg CARTOSAT-2B will be launched into a 630-km high Sun Synchronous Orbit. The satellite carries a panchromatic camera and is capable of imaging a geographical strip of land (swath) of 9.6 km with a resolution of 0.8 metre,” ISRO sources said. “The satellite will help in detailed urban and infrastructure development planning,” the sources stated.

According to the ISRO, the 50-hour countdown for the launch of PSLV’s 17th flight had begun on Saturday morning. “The count down is progressing well and the launch is on schedule,” the sources added. (Source: DNA India)