ABC Radio Australia... Snowdon Interview of SSC's Perrson Re: China's Use Of Their Tracking Stations...

[SatNews] The Swedish owner of two space tracking stations in Australia's far west insists they are only used for civilian purposes.

The government owned Swedish Space Corporation operates the ground stations in the Minginew area located 400km north of Perth. Questions over the potential military use of one of the stations by the Chinese space program have been raised recently. The ABC Radio Australia presenter was Karon Snowdon, who talked with Lars Perrson, Chief Executive of the Swedish Space Corporation. 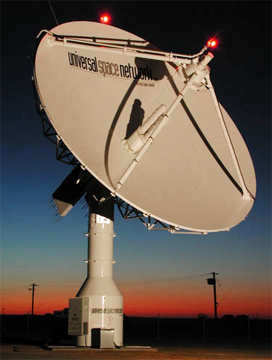 The Dongara facility in Western Australia is part of Prioranet, a commercial tracking network operated by Universal Space Network, Inc., Newport Beach, California, USA, that is being used to track the Galileo IOV satellites. Photo USN, Inc.
SNOWDON: The Swedish Space Corporation or SSC maintains space and satellite facilities around the world. It has two ground tracking stations in Minginew 400 kilometres north of the West Australian capital city, Perth. One , at Dongara West, is run by an SSC US-based subsidiary and used by NASA. The other, called Dongara East, has leased satellite tracking antennae to China's Satellite Launch company among other customers since 2009. China's involvement made newspaper headlines last month during its first space docking operation between the Shenzhou and Tiangong spacecraft. The Australian newspaper and the Wall Street Journal claimed that China and the U.S. are using the same tracking station and that Canberra hadn't consulted Washington. They flagged the possibility for China to use the facility for military purposes, perhaps to track naval movements. SSC's Chief Executive Lars Perrson says, however, the two Dongaras are operated separately and are used only for civilian purposes.

PERRSON: We are a civil space company and our customers - what we allow them to use is our antennae for civil space missions and that's in our contracts as well. That's also when we have applied for approval for using the antennas.

PERRSON: What we are doing is supporting the space station for civil use. You cannot talk to any satellite with any antennae. You have to qualify the antennae and the satellite together so we are quite aware of what satellites are used on our antennae.

SNOWDON: So if a military use was being made of the antennae you're saying you would know about it?

PERRSON: We know what type of satellites are used for example for weather forecasting and things like that. All our customers are civil customers.

SNOWDON: China's space program is ambitious and run by the military. By all reports it plans to progress to a manned space station within the decade. The United States chooses not to allow any contact or cooperation between the two nations' space programs. Australia's small space program is handled by the Department of Innovation, Industry, Science and Research. In a written response, which follows, to questions, a spokesperson said no military activities are undertaken at Dongara and there are no national security concerns.

SPOKESPERSON: In agreeing to the establishment of foreign-owned infrastructure facilities and operations in Australia, the Government assesses a number of factors including economic and national security considerations. All such Government assessments are undertaken on a case-by-case basis. In this way, the Government is able to ensure maximum investment flows and the protection of Australia's interests, and those of our allies and partners. If a proposal is determined to be contrary to Australia's national interest, it will not be approved.

SNOWDON: The department added that where the national interests of other countries particularly Australia's allies, might be at stake, they would be consulted. In this case there were none and there were no briefings. I asked Lars Perrson whether the U.S. government had sought from SSC any clarification as was claimed in newspaper reports.

PERRSON: I won't comment on those relations more than we have sought all licences and approvals and eveybody is satisfied we have got the authorities and licences to use the antennae for civil space missions.

SNOWDON: I suppose then this next question might be difficult for you but I'll ask it anyway. If hypothetically or in future there was evidence that China was making military use of Dongara tracking station, would that be a problem for SSC?

PERRSON: That's a speculation and what will happen in the future and what people will apply for is speculation.