...mini-VSAT Broadband network that will provide customers in Europe, the Middle East, and northern Africa (EMEA) with a 60 percent increase in satellite capacity. The added capacity was provided by consolidating bandwidth covering two separate regions into one powerful unified beam, and by implementing Variable Coding, Spreading, and Modulation (VCSM) technology provided by ViaSat, Inc., (Nasdaq: VSAT), KVH’s partner in the mini-VSAT Broadband network.

“We actively monitor and manage our mini-VSAT Broadband network to ensure we are delivering the speeds and quality of service our customers expect,” said Marc Edwards, KVH’s director of network operations. “Rapid growth of our customer base, which now includes well over 2,500 systems in the field, resulted in increased utilization of the network during peak periods in the EMEA region. We reconfigured our satellite coverage to more effectively serve this region with a single beam, which allows the ViaSat ArcLight® spread spectrum technology used in our network to more efficiently carry the traffic. At the same time we implemented VCSM, and the combination of changes increased our network capacity by 60 percent overall in the EMEA region.” 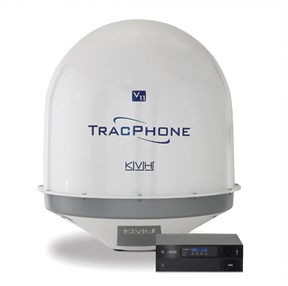 The TracPhone V11 and CommBox-ACU
Photo courtesy of KVH
VCSM will be introduced throughout the remainder of the mini-VSAT Broadband network in coming months. The KVH mini-VSAT Broadband network uses both C- and Ku-band satellite capacity provided by leading commercial satellite operators including Intelsat, Eutelsat, SES, and SKY Perfect JSAT. Several of these companies have significant initiatives underway to provide additional satellite capacity over the world’s oceans. Currently, 14 powerful satellite transponders deliver KVH’s Ku-band capacity, which provides one of the broadest coverage areas of any Ku-band network. This year, KVH added three global C-band beams to the mini-VSAT Broadband network, making it the first and currently the only modern maritime VSAT service using a 1m antenna to provide full global coverage outside of the polar regions.

KVH manufactures three onboard antennas for the mini-VSAT Broadband network—the new enterprise-grade TracPhone® V7-IP, the compact TracPhone V3, which is the world’s smallest maritime VSAT antenna measuring only 37cm diameter, and the new dual-mode TracPhone V11, which provides coverage of 95 percent of the Earth thanks to its ability to receive both C- and Ku-band satellite signals. The mini-VSAT Broadband service equips vessels with the highest data rates available today, with downloads as fast as 4Mbps and uploads as fast as Mbps, as well as Voice over IP (VoIP) telephone lines with optimized service and prioritization of applications.