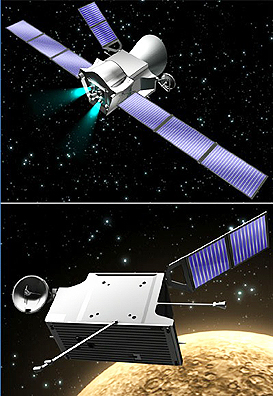 Both images are courtesy of ESA

Top: Beppi Colombo in its cruise configuration
Bottom: artistic rendition of the satellite orbiting Mercury
[SatNews] The satellite that will find out more regarding Mercury will be launched by...

The European Space Agency (ESA) and Arianespace have signed a contract for the launch of the BepiColombo spacecraft, designed to explore the planet Mercury. The launch is scheduled for July of 2014 using an Ariane 5 ECA launcher from the Guiana Space Center, Europe's Spaceport in French Guiana. BepiColombo is a joint scientific mission led by ESA in conjunction with the Japan Aerospace Exploration Agency (JAXA). The spacecraft comprises two probes that will be injected into separate orbits around the planet: ESA's Mercury Planetary Orbiter (MPO), and JAXA's Mercury Magnetospheric Orbiter (MMO). Each of these two probes will be fitted with a suite of high-precision instruments to carry out an exhaustive study of Mercury. BepiColombo will be built by Astrium GmbH and weigh about 4,400 kg at launch. The spacecraft will leave the Earth with a hyperbolic excess velocity of 3.36 km/s.