Garnering $21 Million is Vector for their Launcher Family

Based in Tucson, Arizona, Vector is a self-described disruptor — the company connects space startups and innovators with access to space that is, according to the firm, affordable and reliable.

Vector's vision is to reshape the multi-billion launch market and to combine dedicated, lower-cost launches for smallsats as well as for software defined satellites (Galactic Sky) to dramatically increase access and speed to orbit. The company has just received an infusion of capital from the Silicon Valley VC firm, Sequoia Capital, to the tune of $21 million. Formerly, in April, Vector had bagged some $4.5 million in a bridge round that was used to float the firm until they could complete their Series A financing. In addition, Vector was awarded a Small Business Innovation Research award from NASA and DARPA, along with $2.5 million just prior to their bridge round. 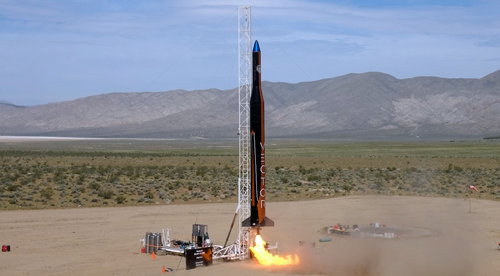 The May 3 launch of the Vector-R prototype launch vehicle. Photo is courtesy of Vector.

The two launch vehicles share common technology and launch facilities that include pressure fed ablative engines, carbon fiber fuselage, LOX/Propylene fuels and mobile launch capability. According to the firm, their launchers are the only launch systems that are dedicated to smallsats and will allow for satellite launches whenever and wherever needed.

The firm's Galactic Sky division transforms the space segment from the current hardware centric state to a much simpler software development proposition with software defined satellites. Vector's ultimate vision is one where space app developers will be able to develop satellite applications on their desktops and then upload that data to an at-the-ready satellite constellation for nearly instant data and revenue receptions.