[SatNews] GlobeCast Australia has a major delivery deal with Event Cinemas that offers 3D HD coverage of more than a dozen sporting events over the next month. In a first for Australian cinema audiences, the cinema chain will screen at selected locations nationally HD 3D coverage of 15 games from the FIFA World Cup(tm) in South Africa; and exclusively, two State of Origin Rugby League showdowns in HD 3D. 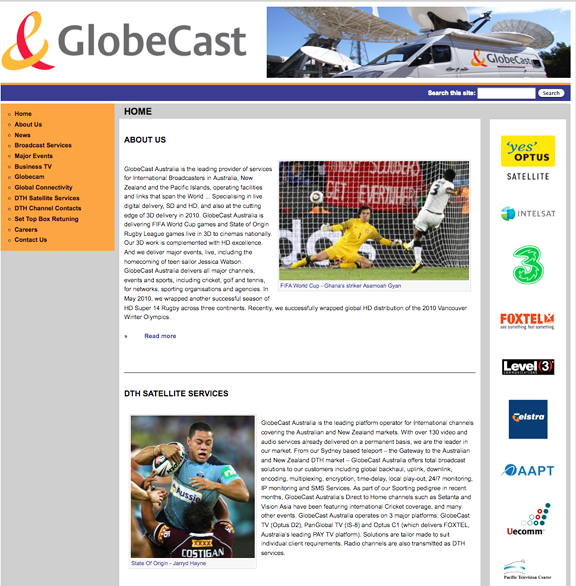 The first FIFA World Cup broadcast will cover South Africa meeting Mexico, while the Australia vs Germany game will be scheduled pre-dawn on Monday, June 14th, at 4:30 a.m. (AEST). Also in HD 3D on the big screen, the next State of Origin bout — Round 2 on Wednesday, June 16th — will be followed by the final showdown for 2010 on Wednesday July 7th. The website, eventcinemas.com.au, will list locations mounting the 3D HD sports broadcasts. The General Manager of Edge Digital Technology (a division of Event Cinemas parent company AHL) Peter Williams said, “From Friday night, we’ll launch with at least nine cinemas, building towards 20 cinemas by the Finals. his means thousands of Australians will have the thrill of watching their teams play in HD 3D, in the shared experience of a cinema with the benefit of a giant screen and tremendous sound.” GlobeCast Australia Operations Manager Peter Doueihi said, “We will deliver this outstanding coverage using 40 Mb per second and 27Mhz of satellite capacity, a state of the art approach to HD 3D transmission.”

GlobeCast Australia will access the FIFA World Feed provided on AsiaSat-5. GlobeCast Australia will then deliver the coverage via its lease on the Optus D2 satellite to cinemas nationally. It has previously also successfully delivered 3D transmissions to broadcasters; and, the cinema deal announced today builds on two years of delivering live events in to dozens of Australia cinemas (ranging from concerts to media launches; and including a live global broadcast of an Andre Rieu concert across Australia and live to cinemas in the Netherlands in 2009). The latest 3D cinema deliveries are just part of GlobeCast Australia’s involvement with global distribution for the FIFA World Cup.

The exclusive and official broadcaster of the 2010 FIFA World Cup South Africa(tm), SBS, has signed GlobeCast Australia to provide its connectivity between studios in Sydney and South Africa, according to GlobeCast Australia Commercial Director Andrew Nealon. This will enable the SBS Cape Town studio to receive SBS off air from Sydney.