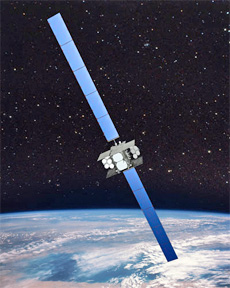 Artistic rendition of the WGS-5 satellite, courtesy U.S.A.F.
[SatNews] United Launch Alliance (ULA) has just released info that the launch of a Delta IV carrying the Wideband Global SATCOM (WGS-5) satellite for the U.S. Air Force is rescheduled for Thursday, May 23.

During acceptance testing for another mission, an avionics box that is used for controlling the Delta booster RS-68 engine experienced an anomaly. ULA is replacing the engine control unit on the WGS-5 vehicle with one that has been inspected and confirmed to not have the suspect condition that caused the recent anomaly in acceptance testing. On May 23, the opening of the 32-minute window begins at 8:28 p.m. EDT.