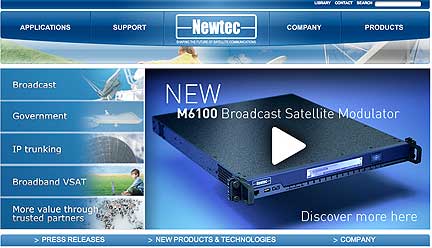 For further information about Newtec, please visit or come to the Newtec booth 1V3-01 at CommunicAsia2012.

Newtec has ushered in a new era of bandwidth efficiency by breaking the magical 0.5 Gbps two-way throughput over a 72 MHz transponder on a Eutelsat satellite.

Testing was performed at Eutelsat’s teleport in Rambouillet during the night in order not to disturb crucial daytime sport transmissions. A significant margin was taken in cloud cover conditions to ensure the tests were relevant for real-life high availability services in broadcast and telecom markets.

The tests were carried out in several steps to validate different market application scenarios. In the two-way high speed backbone tests, Newtec combined its Bandwidth Canceler and Next Generation modems (Newtec MDM6000 series) to achieve a staggering 506 Mbps (2 x 253 Mbps).

A number of innovative elements were used to improve overall current market available efficiencies, including Clean Channel Technology® (a Newtec technology for implementing lowest roll-off and filtering to boost throughput). New modulation and Forward Error Correction (FEC) codes were also used, which can be seen as demonstrators for evolutions in extending the DVB-S2 standard. In particular for this part of the test, a complete reworked 32 APSK 135/180 (135 over 180) modulation proved to be most optimized.

In another test, 352 Mbps was achieved in a one-way distribution set-up over the 72 MHz transponder using 64 APSK modulations and related codes, with significant margin on the Ku-band system.

Serge Van Herck, CEO of Newtec, said: “This latest series of records indicates that Newtec is leading the effort on contributing new technology in previously unimaginable real world applications. The Newtec MDM6000 next generation modem is being released as soon as October and is applicable in a large scope of applications requiring high service availability.”