Increased demand for the AgilePlans™ subscription-based Connectivity as a Service (CaaS) program from KVH Industries, Inc., (Nasdaq: KVHI) has been the driving force behind the company’s growth in VSAT unit deployments during the first six months of 2018, a timeframe when the maritime industry has been increasing its drive toward digitalization.

KVH recently reported that the company has successfully shipped almost as many VSAT systems in the first six months of 2018 as they shipped in all of 2017. Further, KVH VSAT unit shipments from April to June were up 100 percent compared to the same timeframe last year and shipments are at an all-time record by far compared to any quarter in KVH’s 10-year history in the maritime VSAT business. 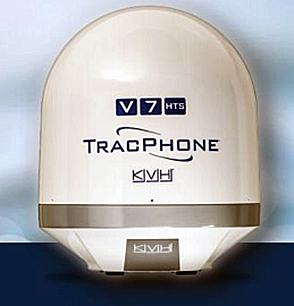 This 60 cm, Ku-band antenna system is designed to consistently deliver global data download speeds of up to 10 Mbps, and upload speeds of up to 3 Mbps. The TracPhone V7-HTS was designed for KVH’s mini-VSAT BroadbandSM network, which late last year began using the award-winning IntelsatOne Flex platform, a global managed service designed to optimize bandwidth allocations and provide flexible coverage where it is needed. With the TracPhone V7-HTS, vessels can take advantage of cloud-based software programs, remote system monitoring, and data analytics in the pursuit of digitalization.

Martin Kits van Heyningen, KVH CEO, said that he believes the recent success is a result of the broad appeal of the company's all-inclusive, no-commitment, AgilePlans program in the commercial markets combined with the firm's new high-throughput satellite global network and superior service and the solution is being selected across all segments, from small to large fleets.