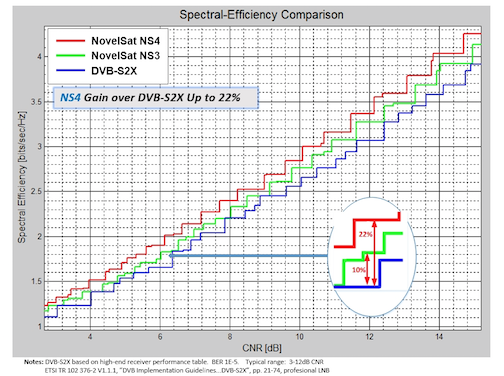 NovelSat NS4 is now available as an optional software package in all NovelSat satellite modems, modulators and demodulators, which also support and are backward compatible with all industry sFor the satellite communications industry, that extra boost of spectral efficiency with NovelSat NS4 means more HD and 4K UHDTV channels and more data without increasing their costly satellite bandwidth budgets.

For those with steady satellite bandwidth needs, as much as 22 percent better efficiency means they can transmit the same content using far less bandwidth. In networks using the DVB-S2 standard, switching to NovelSat NS4 can boost capacity by up to 45 percent without increasing bandwidth.

The new NovelSat NS4 waveform, like all NovelSat features, is a software upgradable option that can be installed over the air (OTA) on all NovelSat satellite devices. This software-only model has proven very popular with NovelSat customers who want to optimize bandwidth utilization without the hassle or cost of replacing equipment.

“Since we released NovelSat NS3 in 2011, NovelSat has consistently offered our customers the most bandwidth efficient satellite technologies available,” said Itzik Wulkan, NovelSat CEO. “NovelSat NS4 is a technological breakthrough which is the culmination of years of experience and hard work that started the day after NovelSat NS3 was released.”

Along with NovelSat NS4, NovelSat released the NovelSat NS4 Calculator. This is a tool that can be used, upon request, to show details about how NovelSat NS4 optimizes bandwidth usage with varying operating parameters. NovelSat also recently announced a new streamlined customer support program which, among its other advantages, offers Gold-level customers eligibility for free upgrade paths to NovelSat NS4.