However, reports by Volcano Live and heat signatures detected by satellite suggest recent activity. Although not definitive, this natural-color satellite image also suggests an ongoing eruption. The dark summit crater (much darker than Mawson’s shaded southwestern face) is at least partially snow-free, and there’s a faint hint of an even darker area—perhaps a lava flow—within. Shortwave infrared data (collected along with the visible imagery) shows hot surfaces within the crater, indicating the presence of lava in, or just beneath, the crater. Heavy cloud cover in the area camouflaged what may have been a plume erupted less than an hour later. 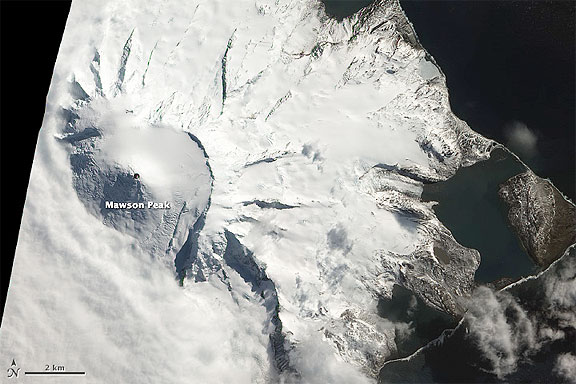 Located on the inaccessible Heard Island, 2,000 kilometers (1,200 miles) north of Antarctica and 2,700km (1,700 miles) southwest of Africa, satellites are the primary means of monitoring Mawson Peak. This image was acquired by the Advanced Land Imager (ALI) aboard the Earth Observing-1 (EO-1) satellite on October 13, 2012.