Over the past 18 months, ESA and its Member States have gathered in a series of space exploration workshops culminating in a discussion in the ESA Council held in Paris on June 13, 2018.

The Council discussed Europe’s ambition to play a leading role in the global exploration of space based on its European Exploration Envelope Program, (known as E3P) that was created by ESA’s ministers when they met in December 2016 in Lucerne, Switzerland. Taking stock of previous decisions and progress in defining new missions, strong support emerged at the June Council on the shape of an exploration mission framework for the future of E3P. The framework foresees a balanced investment between ESA’s three exploration destinations (low Earth orbit, the Moon and Mars) and between human infrastructures, transportation and robotic missions. 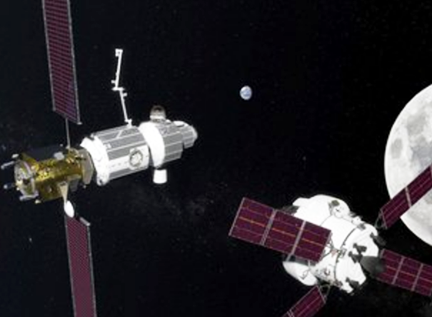 Through a revised legal act, the Participating States in the E3P Program also approved steps that could see Europe become a major player in the ‘Lunar gateway,’ a concept that extends the presence of humans one thousand times farther into space compared with today.

The Council was informed that studies and technology developments are under way including enhancements of the European Service Module for NASA’s Orion spacecraft to support visiting astronauts as well as modules for the gateway itself. ESA held a Call for Ideas for use of the gateway in 2017, generating 100 ideas from the European science and technology community in areas as diverse as human physiology, Solar System science and lunar exploration. These preparations all look forward to possible decisions to be taken at the next Ministerial Council in 2019.

ESA’s Director of Human and Robotic Exploration David Parker said that there’s no doubt that the next decade is going to be exciting for space exploration. ESA and its Member States are working hard to keep Europe at the heart of the journey of discovery and fascination that lies ahead, and the Council decision was an important step forward.

The Member States also underlined the importance of implementing, in a timely manner, ongoing exploration activities. These include ESA’s central role in the International Space Station as well as the ExoMars program. ESA astronaut Alexander Gerst returned to the International Space Station recently to work on an extensive scientific programme, while the Council heard that ExoMars 2020 completed its Critical Design Review in May, an important step towards launch.

with the aim of finalizing the agreements in time for their eventual approval at the Ministerial Council  in 2019.