The U.S. Air Force (USAF) has announced the selection of Lockheed Martin for a fixed-price-type production contract for 22 GPS III Follow-On satellites with a total estimated contract value up to $7.2 billion. 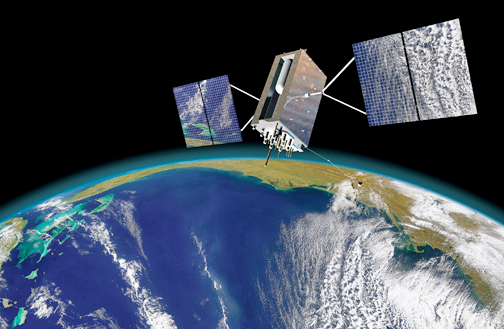 Artistic rendition of a GPS III satellite on orbit.

Since the Department of Defense (DoD) delegated decision authorities on this program to the USAF, the service saved five months by eliminating an additional layer of reviews and speeding up the source selection process. Additionally, by using a fixed-price contract, the contractor, not the taxpayer, would be responsible for any cost overruns. The first GPS IIIF satellite is expected to be available for launch in 2026.

Secretary of the Air Force, Heather Wilson, said that the world is dependent on GPS, from getting directions to getting cash from an ATM or trading on the stock exchange. These satellites will provide greater accuracy, and improved anti-jamming capabilities, making them more resilient. She added that America’s Air Force is being fielded faster and smarter.

Chief of Staff of the Air Force, General David L. Goldfein, stated that since Desert Storm, the nation's joint and allied war fighting team have relied on uninterrupted position, navigation and timing signals to employ precision on and over the battlefield. This investment in GPS III continues to advance our capabilities into the future.”

Dr. Will Roper, Assistant Secretary of the Air Force for Acquisition, Technology and Logistics, noted that the acquisition and contracting strategies are sound; waiting to award only takes time away from the warfighter.

Lieutenant General John F. Thompson, Space and Missile Systems Center Commander and USAF program executive officer for space, added that through this acquisition, the USAF is demonstrating many of the principles of the SMC transformation. Getting to a manufacturing steady state in a fixed-price environment will allow SMC the opportunity to realize substantial cost savings, deliver on a planned schedule, and provide avenues for needed warfighter capability upgrades in the future.