[SatNews] After a year in service, the German Earth observation satellite TanDEM-X, together with its twin satellite, TerraSAR-X, have completely....

....mapped the entire land surface of Earth for the first time. The data is being used to create the world's first single-source, high-precision, 3D digital elevation model of Earth. The German Aerospace Center (Deutsches Zentrum für Luft- und Raumfahrt; DLR) controls both radar satellites, generates the elevation model and is responsible for the scientific use of TanDEM-X data. It is reminiscent of ballet on ice; throughout the last year, Germany's radar satellites, TanDEM-X and TerraSAR-X, have been moving through space in close formation, at times just a few hundred metres apart. Strip by strip, they have recorded Earth from different angles and transmitted high-resolution radar data from their orbit at an altitude of 514 kilometres down to the three ground stations – Kiruna (Sweden), Inuvik (Canada) and O'Higgins (Antarctica). "The mission is running better than expected and there have been no unscheduled interruptions in the programmed formation flight of the two satellites. All safety mechanisms are functioning robustly and in a stable manner," said Manfred Zink, project manager for the TanDEM-X ground segment at DLR. Over the course of 2011, the distance between the satellites was progressively reduced down to the minimum permitted value of 150 metres. 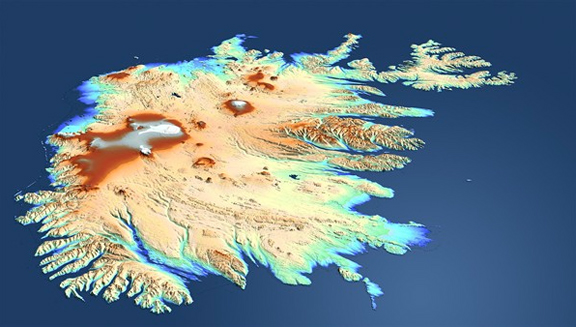 The first TanDEM-X mosaic of Iceland.

This satellite mission is the first of its kind; it remains unique and is highly complex, even for experienced engineers. "Following the launch of TanDEM-X on June 21, 2010, there was a six-month test phase, during which we subjected the satellite and its behavior in near-Earth orbit to intense scrutiny and carried out our calibration work," Zink recalls. During this time, TanDEM-X commenced formation flying with its identical partner satellite, TerraSAR-X, which was launched in 2007. On 14 December 2010, the operational part of its mission began, collecting data for the high-precision elevation model.

The radar system views the ground from two different points in space, achieving 'depth perception' in a manner similar to binocular vision in humans. "The generation of accurate elevation data calls for precise coordination of data from and between both satellites," said Gerhard Krieger, systems engineer for the TanDEM-X mission. Differences, for example in the cable lengths on the two radar instruments, as well as the distance between the two satellites, need to be calibrated very precisely. "This is a truly enormous challenge when you consider that a millimetre of variation can cause up to one metre of elevation error," says Krieger. 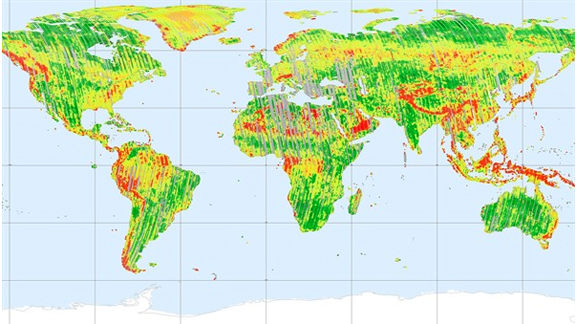 TanDEM-X has completely captured the Earth - strip by strip.

The strips of terrain recorded by the satellites are processed into elevation models measuring 50 by 30 kilometres. Due to the ultra-precise calibration, when this 'basic data' is compiled at the end of the process to generate a global 3D map, it is already of very high quality. By mid-2013, TanDEM-X and TerraSAR-X will have imaged the complete land surface area of Earth – roughly 150 million square kilometres – several times. The intention is to create an exceptionally accurate, global and homogeneous 3D elevation model that promises to be of equal interest for commercial and scientific purposes.