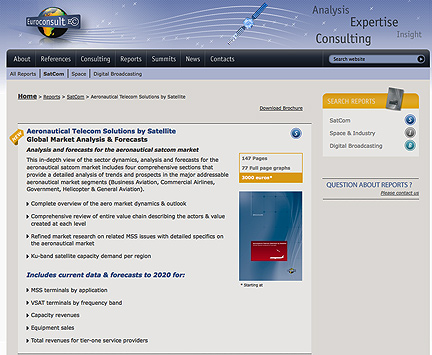 Euroconsult report infopage
[SatNews] Driven by ever-increasing communications needs from cockpit and cabin applications, revenue in the global aeronautical satellite communications market grew by almost 25 percent in 2010 and will continue to grow at a steady though slower pace over the next decade.

This information is according to a new report from Euroconsult, an international consulting and research firm specializing in the space and satellite sectors. The report, “Aeronautical Telecom Solutions by Satellite: Global Market Analysis & Forecasts,” said global market revenues reached $1.3 billion in 2010 for satellite bandwidth, terminals, value-added services and aircraft retrofits. Revenue is expected to grow to $2.3 billion by 2020, with government users continuing to drive just over half of the aero communications market.

“The market is being driven by everything from passenger Internet on commercial airliners to the bandwidth used in long-distance military operations,” said Wei Li, Senior Consultant at Euroconsult and main editor of the report ‘Aeronautical Telecom Solutions by Satellite’. “While commercial use will grow over the next decade, the government market for aeronautical satellite communications will grow just as rapidly and continue to represent the largest segment of the business.” Government use includes military aircraft; reconnaissance & surveillance planes; Head of State jets & helicopters; and especially long endurance Unmanned Aerial Vehicles (UAVs). The report breaks down the market forecast by segment and geographic area.

L-band based MSS services currently dominate the aeronautical satellite communication market and are expected to account for the majority of terminal deployment in the next 10 years. However, with significant technical improvements from FSS operators, high throughput Ku- and Ka-band VSAT services are expected to grow at a double-digit rate in both terminals and revenues over the next decade. As a consequence, Ku-band satellite capacity usage is expected to grow by more than 400 percent in the next decade. The report also examines how the Ka-band satellites planned by Inmarsat and others will impact the aero communications market for both bandwidth and equipment sales, with an analysis of how quickly Ka-band is expected to be adopted by different segments of the market. At the satellite operator level, overall revenues for both MSS and FSS operators are expected to grow from $210 million in 2010 to almost $670 million in 2020, for a compound annual growth rate (CAGR) of 12 percent. For equipment vendors, the total revenue for L-, Ku- and Ka-band equipment is expected to reach $866 million in 2020, with over 97,000 terminals in operation.