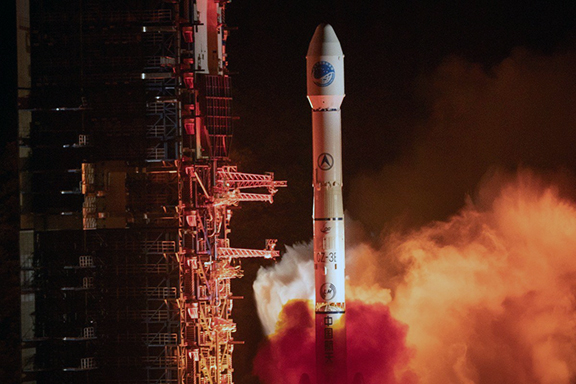 The 20th Beidou satellite launch from Xichang in southwest China.

China has launched their 20th global navigation system satellite and has taken another step toward completing the network the nation hopes will eventually rival the global positioning system (GPS) operated by the United States, this according to a post by journalist Liu Zhen of the South China Morning Post.

After it was launched close to midnight on Saturday, April 20, from the Xichang center in southwest China, the latest addition to the Beidou constellation successfully entered an inclined geosynchronous satellite orbit, as reported by the state news agency Xinhua on Sunday.

This is the first of three satellites planned for that orbit. Beidou will also have 27 satellites in medium earth orbit and five in geostationary orbit when it is completed next year. The newest satellite was the first to be sent up this year and is expected to be followed by another seven to nine by the end of 2019.

China has been developing and operating the Beidou navigation system, or BDS, since 1994. With both military and civilian applications, the system is aimed at challenging the dominance of GPS in the global positioning market.

BDS began offering a basic global service in December, with priority for the Asia-Pacific region and countries along the route of the “Belt and Road Initiative” — Beijing’s trade and infrastructure strategy that spans Asia, Africa, Europe and beyond.

Beijing has been promoting BDS to countries taking part in the initiative by offering additional services and other incentives if they sign up for the system. According to a Chinese government white paper on Beidou from 2016, the system was intended to primarily serve the interests of belt and road countries. Meanwhile, the government has ordered all buses, heavy trucks and fishing boats in China to install BDS for real-time monitoring and tracking, and there are already 70 million Beidou-linked chips in use in the country.

Last month that satellite's operator, the National Administration of Global Navigation Satellite Systems and Applications, said that with as many as 10 new satellites sent into orbit this year, the network in MEO would be complete.

There are 19 Beidou satellites operating in MEO at the moment, while GPS has 24 satellites in that orbit but none in geostationary or inclined geosynchronous satellite orbit. The newest satellite in the Beidou network was placed into orbit by a Long March 3B rocket during its 100th launch, according to Xinhua.