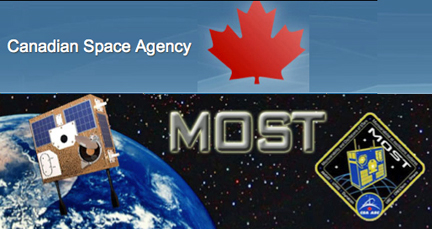 [SatNews] After more than ten years of studying the Universe, the Canadian Microvariability and Oscillation of STars (MOST) mission will come to an end on September 9th, 2014, having exceeded its objectives.

Since its launch in 2003, MOST has produced more than 100 science publications and provided astronomers with new insights into the behavior of stars. Originally planned as a one-year project, MOST was extended annually due to the telescope’s continued successes.The suitcase-sized telescope will leave a prolific legacy of data for astronomers to analyze.

In the fall of 2013, the Canadian Space Agency (CSA) conducted a mission extension review in cooperation with members of Canada’s astronomy community. The evaluation weighed the mission’s ongoing operational costs against its objectives and new alternatives to obtain similar data. The review led to the recommendation that the mission be terminated, considering that MOST had already surpassed its objectives. MOST has helped a new generation of astronomers and space engineers advance their studies and research. Under the leadership of its Principal Investigator, Dr Jaymie Matthews of the University of British Columbia, the MOST science team currently includes members from: the University of British Columbia, the University of Toronto, Université de Montréal, St-Mary’s University, the University of Vienna, Harvard University and NASA’s Ames Research Center.

“Thanks to the Canadian Microvariability and Oscillation of STars telescope, Canadian astronomers have produced a decade’s worth of astounding discoveries and Canada’s space industry gained essential expertise. As MOST prepares for its retirement, I offer my congratulations to the talented team of astronomers and engineers on this Canadian science and technology success story.”—General (Retired) Walter Natynczyk, CSA President