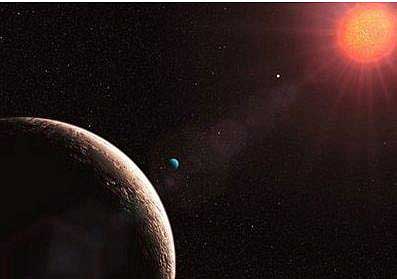 Goldilocks Planet
[SatNews] US astronomers said Wednesday they have discovered an Earth-sized planet that they think might be habitable, orbiting a nearby star, and believe there could be many more planets like it in space.

The planet, found by astronomers at the University of California, Santa Cruz, and the Carnegie Institution of Washington, is orbiting in the middle of the "habitable zone" of the red dwarf star Gliese 581, which means it could have water on its surface.

Liquid water and an atmosphere are necessary for a planet to possibly sustain life, even it it might not be a great place to live, the scientists said.

The scientists determined that the planet, which they have called Gliese 581g, has a mass three to four times that of Earth and an orbital period of just under 37 days.

Its mass indicates that it is probably a rocky planet and has enough gravity to hold on to an atmosphere, according to Steven Vogt, professor of astronomy and astrophysics at the University of California, Santa Cruz, and one of the leaders of the team that discovered the planet.

If Gliese 581g has a rocky composition similar to Earth's, its diameter would be about 1.2 to 1.4 times that of the Earth, the researchers said.

The surface gravity would be about the same or slightly higher than Earth's, so that a person could easily walk upright on the planet, Vogt said.

Gliese 581g was discovered by scientists working on the Lick-Carnegie Exoplanet Survey, during 11 years of observing the red dwarf star Gliese 581, which is only 20 light years from Earth.

For astronomers, eleven years of observation is considered a short time and 20 light years, which is roughly 117.5 trillion miles, rather close. The sun is around eight and a half light minutes from Earth.

"The fact that we were able to detect this planet so quickly and so nearby tells us that planets like this must be really common," said Vogt.

The planet is tidally locked to its star, meaning that one side is always facing the star and basking in perpetual daylight, and the other is in perpetual darkness because it faces away from the star.

With surface temperatures decreasing the further one goes toward the dark side of the planet and increasing as one goes into the light side, the most habitable part of the new planet would be the line between darkness and light, which is known as the "terminator".

The researchers estimate that the average surface temperature of the planet would be between -24 and 10 degrees Fahrenheit (-31 to -12 degrees Celsius). But actual temperatures would range from "blazing hot on the side facing the star to freezing cold on the dark side," they said.

The findings, which will be published in the Astrophysical Journal and posted online at arXiv.org, "offer a very compelling case for a potentially habitable planet," said Vogt.

The remainder of this article is available here .