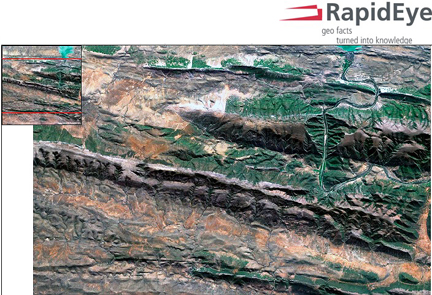 The campaign, which ran for 25 weeks from September of 2010 until March 1, 2011, produced more than 107 Million km² of the continent of Africa which is now available for purchase from the RapidEye Library. “This is another amazing demonstration of what our system is capable of achieving,” said Michael Oxfort, RapidEye's Head of Engineering. “We tasked our satellites to acquire over 4,200 takes over the entire continent of Africa. Many areas of rainforest, such The Democratic Republic of the Congo, have been collected with great success and very little cloud cover.” In recent weeks, RapidEye has signed on two new distributors in Africa, with more on the way. The RapidEye Library now contains more than 90 percen of Africa with less than 10 percent cloud coverage. Many areas have been imaged multiple times since the RapidEye satellites became commercially operational 25 months ago. Since February of 2009, the RapidEye system has collected more than 1.8 Billion square kilometers of imagery world-wide.