Russia's Rogozin States His Nation Won't Catch Up To The US In The Space Race... Then Eats His Words 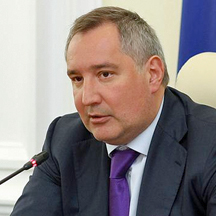 The Moscow Times is reporting that Deputy Prime Minister Dmitry Rogozin has been left red-faced after telling reporters that “Russia will never catch up to the United States in the space race,” the Interfax news agency reported.

“Our space industry has fallen behind the Americans nine-fold. All of our ambitious projects require us to up productivity 150 percent – and even if we manage that, we will still never catch up with them,” Rogozin originally said to Interfax Friday. “We will be following the news about NASA and [Elon] Musk and licking our lips while trying to explain ourselves why we don't need what they are doing,” Rogozin added, according to the RIA Novosti news agency.

Rogozin took to Facebook later in the day to say that his quotes had been taken out of context. In the field of space-rocket engine construction, Russia is much more competitive than the US both in terms of quality and prices, he said. "I said that, considering our ambitious plans of to increase labor productivity in the space industry, we will never catch up with the Americans in that regard," the deputy prime minister said. "But this absolutely does not mean that we are behind them [the United States] in every other aspect of space exploration."