Roscosmos... Turbopump Was The Problem On The Upper Stage (Launch)

[SatNews] Russian space agency Roscosmos experts say the destruction of a bearing inside the turbopump of the...

...Briz-M upper stage's engine is the most likely reason for the initial failure of Russia’s Yamal-402 satellite to reach its designated orbit, the Kommersant business daily reported on Tuesday. The satellite was launched from the Baikonur Space Center in Kazakhstan on December 8th, but separated from its upper stage four minutes early, failing to reach the desired orbit. A four-step recovery plan developed by aerospace company Thales Alenia Space later got the satellite into its target orbit using its engines.

The service life of the satellite will be reduced from 15 to 11 years due to the emergency use of some of its fuel reserves. The failure was not the first for Briz, which has a less than perfect reliability record. Kommersant reported that the final results of the investigation into the failure will be announced by the end of the year. Roscosmos specialists will now check the condition of all turbopumps. 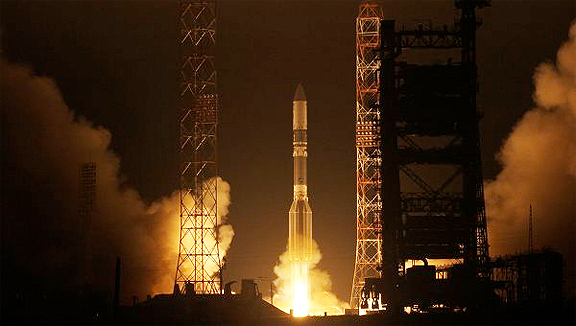 The Yamal-402 launch from Baikonur

The Yamal-402 satellite, built by Thales Alenia Space, is equipped with 46 Ku-band transponders providing for the coverage zone over the most part of the territory of Russia, the CIS, Europe, Middle East and Africa. This is the second Yamal-class telecoms satellite launched for Gazprom Space Systems (GSS), a telecommunications arm of Russia’s energy giant Gazprom, this year. The Yamal-300K telecoms satellite, built by Russia’s Reshetnev space company, was orbited on November 3. Its service zone covers 95 percent of the Russian territory. The GSS, formerly known as Gazcom, also has Yamal-201 and Yamal-202 telecoms satellites in orbit. The company plans to have the Yamal satellite network in full operation by 2020. (Source: RIA Novosti)