[SatNews] Eutelsat Communications (NYSE Euronext Paris: ETL) has unveiled plans during the CommunicAsia2014 exhibition in Singapore for significantly scaling up its presence in the Asia-Pacific (APAC) region.

The company is embarking on a new triple mission satellite program that will support sustained demand for capacity for data, fixed and mobile broadband services as well as video. The satellite will also host the Pacific Ocean Region's first High Throughput Satellite (HTS) payload, which Panasonic Avionics Corporation has already selected as its key growth platform for trans-Pacific and Asian in-flight broadband and live TV services provided to commercial airlines. 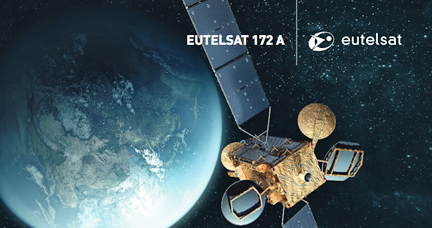 Artistic rendition of the Eutelsat 172A satellite,
located at 172 degrees East.

Eutelsat’s new high-capacity satellite, EUTELSAT 172B, will be launched in 2017 to 172 degrees East as an early follow-on program to EUTELSAT 172A. This new satellite will provide continuity and expansion capacity at a position that is already a prime gateway for services in the Asia Pacific region. 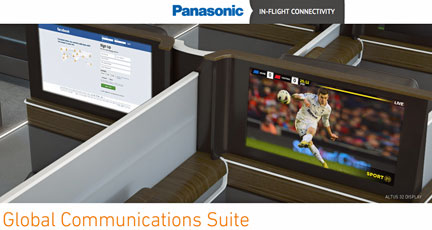 Panasonic Avionics Corporation, one of the fastest growing providers of in-flight entertainment and communications, has signed a long-term agreement with Eutelsat America Corp. (EAC), Eutelsat’s US subsidiary, that will make it the anchor client for the satellite's High Throughput payload for broadband services and a user of its regular Ku-band capacity for live TV. The capacity booked will transform the range of services Panasonic Avionics Corporation already delivers to commercial airlines through EUTELSAT 172A, positioning it as a key provider of passenger connectivity and entertainment as well as fast and concise collection and communication of aircraft and crew data.

Commenting on the new program, Michel de Rosen, Eutelsat Chairman and CEO, said, “In addition to delivering significant scope for growth for existing clients, this highly efficient asset in the sky places our 172° East position front and centre of the rapidly expanding market for mobile services in the Pacific Ocean region. We welcome Panasonic Avionics Corporation as an anchor tenant on EUTELSAT 172B. Their long-term commitment to this location underscores its unmatched vantage point over a wide and underserved area spanning from the West coast of North America, to Asia and down to Australia and Pacific islands.”

Paul Margis, President and Chief Executive Officer of Panasonic Avionics, said, “Demand for in-flight connectivity is increasing exponentially, especially in Asia. This agreement with a capable technology partner such as Eutelsat represents a continuation of our commitment to serve the aviation industry with the most capable and comprehensive connectivity solution available today and in the future.”

The Eutelsat infosite may be accessed via http://www.eutelsat.com/

The Panasonic Avionics Corporation infosite is located at http://www.panasonic.aero/