[SatNews] Lift off was successful for this NRO payload... 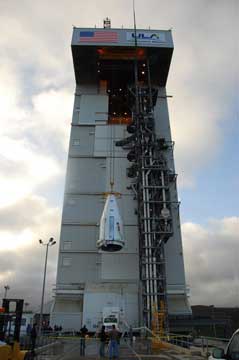 Before: The new NROL-34 spy satellite and rocket nose cone are mated to its Atlas 5 booster in preparation for launch from Space Launch Complex-3 at Vandenberg Air Force Base in California on April 14, 2011. Cedit: United Launch Alliance
On Thursday evening, the ULA Atlas V with the NRO’s L-34 payload stood ready to launch at Vandenberg AFB's Space Launch Complex-3. The weather forecast earlier stood at a 30 percent chance of acceptable weather due to ground level winds. This launch marks the 25th launch of the Atlas V vehicle since its first launch in August 2002. This mission is in support of national security. Lots of intrigue as weather reports made it sound tenuous, but at last the launch took place.

The Atlas 5 rocket takes an unconventional shape that provides just the right amount of power for its payload. The Atlas 5-411 vehicle's single solid-fuel booster is mounted to the first stage making this configuration unique because rockets typically fly with either no strap-on boosters or multiple motors. The concept of the Atlas 5 was that is was designed from its initial concept with the thought of each launch being tailored to the payload. If a cargo's weight needs the power of only one booster, then that's how the rocket will be built. Additional photos will be placed on ULA's website at tomorrow, April 15, 2011.

Here is the official ULA press release regarding this important launch... 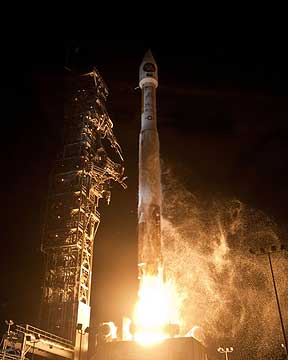 This event marked the 25th Atlas V rocket launch in program history. The first Atlas V launched in August 2002. Since then, Atlas V has launched a variety of payloads for the military, NASA, and commercial customers, all successfully. “Today’s successful launch of the NROL-34 mission represents a tremendous accomplishment for our national security customer,” said Jim Sponnick, ULA vice president, Mission Operations. “Less than two years ago, this integrated team put in place a very challenging plan to launch five EELV/NRO missions in less than seven months. The combined NRO Office of Space Launch, U.S. Air Force Launch & Range and ULA teams have executed this plan flawlessly, culminating in today’s successful launch aboard our 25th Atlas V rocket. With each of these incredibly important launches, we are reminded of the role we play in offering enhanced effectiveness and safety to the men and women protecting our country. Congratulations to the ULA team and our government, mission, and supplier partners for making these five successful NRO missions possible.”

This mission was launched by an Atlas V 411 configuration launch vehicle, which uses a single common core booster powered by the RD-180 engine and one solid rocket motor. This was the fourth launch of 2011 for ULA, including two for the NRO and one for the United States Air Force. ULA's next launch is the Atlas V SBIRS GEO-1 mission currently scheduled for May 6 from Space Launch Complex-41 at Cape Canaveral Air Force Station, Fla. ULA program management, engineering, test and mission support functions are headquartered in Denver, Colo. Manufacturing, assembly and integration operations are located at Decatur, Ala., Harlingen, Tex. and San Diego, Calif. Launch operations are located at Cape Canaveral AFS, Fla., and Vandenberg Air Force Base, Calif.