U.S.A.F. — It's All About SATCOM, Navigation + Timing For Haitian Relief Activities

Members of the Joint Functional Component Command for Space at Vandenberg AFB are continuing to support relief efforts in Haiti by providing space effects, such as satellite communications and position timing and navigation services. At any given time, up to 200 personnel, including the JFCC-Space staff and tactical units, Joint Space Operations Center, are contributing to the overall space support delivered to Haiti. 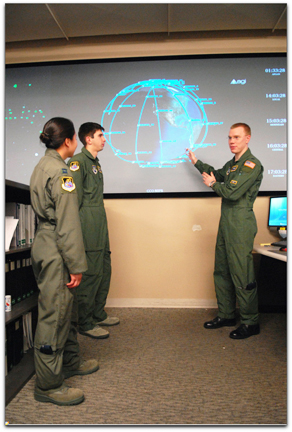 With the tracking system for the Iridium satellite constellation on screen, 1st Lt. Daniel Moomey explains his knowledge of how the system works to Capt. Amy Ianacone and Airman Patrick Adams Jan. 7, 2010, at Vandenburg Air Force Base, Calif. The Joint Space Operations Center recently reached a milestone Dec. 18, 2009, increasing the number of active satellites tracked from 120 to approximately 1,150. Lieutenant Moomey, Captain Ianacone and Airman Adams are from the Joint Space Operations Center. (U.S. Air Force photo/Airman 1st Class Angelina Drake)
Additionally, the JSpoC force enhancement team, made up of approximately 30 members, is primarily responsible for theater integration and is the JFCC-Space focal point for the reception of space support requests from users such as those at Southern Command and Joint Task Force-Haiti.

JFCC Space members were involved less than 24 hours after the Haiti disaster occurred. Once initial reports of the earthquake in Haiti reached the 24-hour watch floor of the JSpOC, it triggered a standing process to begin planning to support any requests for space support that may come from the U.S. government forces supporting relief operations. That process included drafting of a statement of intent directive from Lt. Gen. Larry D. James, the commander of the Joint Functional Component Command for Space, for space forces assigned and attached to JFCC-Space to be prepared to support relief operations. JSpOC planners then began matching available space assets to the anticipated relief needs, and preparing the tasking order to direct space units to provide support as requested. After the quick response, JFCC-Space efforts have focused on ensuring minimal interruptions of position timing and navigation services as well as ensuring availability of satellite communication constellation assets, he said. These effects are being ensured primarily through the prioritization and minimization of maintenance activities in these two areas.