[SatNews] ViaSat Inc. (Nasdaq: VSAT) has completed operational testing of an airborne intelligence, surveillance, and reconnaissance (ISR) satcom system that is providing transmission of 4 Mbit/sec through a high-speed return link off the aircraft. 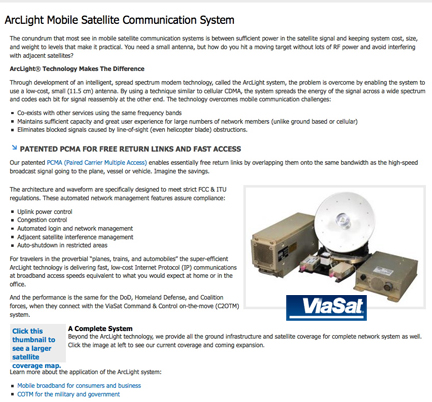 ViaSat ArcLight infopage link...
The tests were conducted during live missions on a U.S. Special Operations Command (USSOCOM) C-130 aircraft operating in Afghanistan using an upgraded ViaSat ArcLight® satellite system. USSOCOM is continuing to fly daily missions using the new system. The upgrade was a simple modem replacement on the aircraft, which was already equipped with a previous generation ArcLight modem and ViaSat VR-12 11.5-inch Ku-band antenna. Using the same antenna, the link achieved data rates of 4 Mbps, transmitting full motion video from the aircraftto a hub also located in Afghanistan. The new modem has operated at up to 10 Mbps at Ka-band using the Ka-band version of the VR-12 antenna, but to match video encoders already on the aircraft, live mission flights typically operate at 2.5 Mbps air to ground.

The KuSS system with the new ArcLight modem far exceeded our expectations and sets a new standard for airborne satcom, especially for those platforms that can accommodate only very small antennas in the 12-inch class,” said Jim Herren of USSOCOM. “We are flying live missions at the maximum capability of our video equipment and delivering very high quality 720 x 480 standard definition (near HD) full motion video from the aircraft.”

“Besides the obvious advantage of the higher data rates, the ease of modifying the more than 200 aircraft already equipped with ArcLight is a major advantage,” said Larry Taylor, director of business development at ViaSat who was also present during the testing. “The new modem retains the full functionality of the ArcLight system and adds a new mode that provides much higher data rates. That compatibility also enables customers to use our worldwide Yonder® network, as well as roam among various government-specific ArcLight networks.”