Space Systems/Loral (SS/L), a subsidiary of Loral Space & Communications (Nasdaq:LORL) has announced that a satellite that the Company built for the National Oceanic and Atmospheric Administration (NOAA), was retired after serving the organization for 12 years, more than twice its required mission life. Originally planned for a 5-year mission, the satellite, called GOES-10, was used to track storms, hurricanes, and cyclones from 1997 until just a few months ago. 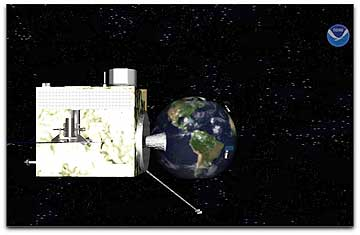 GOES-10 satellite
GOES-10 was one of five advanced weather satellites that were provided by SS/L as part of the Geostationary Operational Environmental Satellites (GOES) I-M program, built under contract to NASA Goddard Space Flight Center and launched between 1994 and 2001. Last month, NOAA raised GOES-10 approximately 300 km above its functional orbit by firing its thrusters one last time. To date, the GOES satellites provided by SS/L have collectively outperformed their life expectancy by more than 25 years, with two of the satellites still providing continuous monitoring and measurement of weather events.

In fulfilling the NASA contract, SS/L provided significant improvements over the previous GOES system in both weather imagery and atmospheric sounding information, allowing for improved weather services, including the forecasting of hurricanes and other severe storms that threaten life or property. Supporting the U.S. weather monitoring and forecast operations, the GOES satellites are a key component of NOAA's National Weather Service operations. With the de-orbiting of GOES-10, 59 SS/L-built geostationary satellites are currently providing services around the world.