This first antenna tower was designed using these techniques, which include additive manufacturing, which is more commonly known as 3D printing and was launched last December on the JCSAT-15 satellite. The spacecraft was designed and built for SKY Perfect JSAT, a satellite operator based in Japan. The satellite, renamed JCSAT-110A, has completed on orbit testing and is performing according to plan. 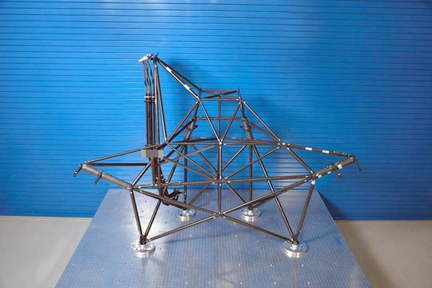 The highly optimized strut-truss antenna tower used on JCSAT-110A consisted of 37 printed titanium nodes and more than 80 graphite struts. The strut-truss design methodology is now standard for SSL spacecraft, with 13 additional structures in various stages of design and manufacturing, and has resulted in SSL using hundreds of 3D printed titanium structural components per year.

For SSL, optimizing at the system level with additive manufacturing has enabled an average of 50 percent reductions in mass and schedule for large and complex structures. The savings over conventionally manufactured structural assemblies is much greater than what is possible with the optimization of an individual part. Since the launch of JCSAT-110A, SSL has completed assembly and testing on several other strut-truss structures and continues to expand its use of additive manufacturing and other next-generation design and manufacturing techniques.

“SSL is an innovative company that continues to evolve its highly reliable satellite platform with advanced technologies,” said Dr. Matteo Genna, chief technology officer and vice president of Product Strategy and Development at SSL. “Our advanced antenna tower structures enable us to build high performance satellites that would not be possible without tools such as 3D printing.”

Paul Estey, the Executive Vice President, Engineering and Operations at SSL, added, "This breakthrough in satellite design is an example of SSL’s holistic approach to new technologies and its teamwork with satellite operators that need to maximize their satellites’ capability.”