High School Students in Iowa to Launch with NASA 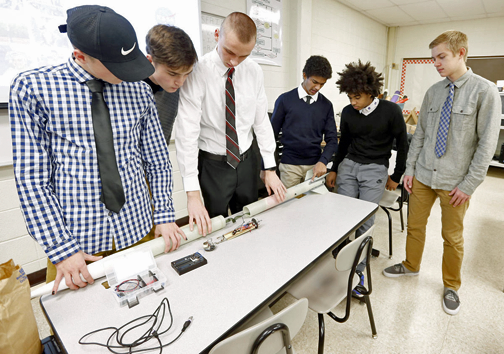 Members of the Science, Technology And Rocketry Students (S.T.A.R.S.) club at Cedar Falls High School looking over components of one of the smaller model rockets they've built are, from left, Erik Walther, Will Burken, Ryan Ritter, Randev Goonesekere, Andre Bryan and Duncan Meyer.

Photo is courtesy of The Courier.

As reported in Iowa's The Courier infosite, authored by Andrew Wind, after finishing near the top of a national competition last spring, a Cedar Fall High School rocket club team is working with NASA on their next project.

The Science, Technology And Rocketry Students team was invited to submit a proposal to participate in the NASA Student Launch after earning fifth place during the Team America Rocketry Challenge in May. The top 24 teams in the contest were invited and the S.T.A.R.S. group was among 15 that were accepted. An email to adviser Zeb Nicholson, a teacher at the school, was received while the team’s six members gathered with him over the lunch hour.

“We were quite excited,” said team member Will Burken, a senior. Other team members include senior Ryan Ritter and juniors Randev Goonesekere, Erik Walther, Andre Bryan, and Duncan Meyer.

An intensive process lasting throughout the school year will culminate in launch week, April 4-7. The team will travel to NASA’s Marshall Space Flight Center in Huntsville, Alabama, and launch an 8 foot tall, 4.5-inch diameter fiberglass rocket weighing 15 to 20 pounds that the members are preparing to build.

Student Launch started at the high school level 17 years ago and later expanded to colleges. NASA works with students to “introduce them to a real-world technology challenge and maybe get them interested in working for NASA someday,” Fred Kepner, an education specialist at the center, said in a phone interview.

Work on the nearly 40 page proposal was done by the team at the beginning of school year and submitted on September 22. The students’ task was to propose a “payload” for their high-powered rocket. In this case, that will be solar panels and other equipment recording and transmitting data on how much energy they can gather and store during the rocket’s flight.

“They chose to measure the intensity of solar power at one mile of altitude,” said Nicholson, the height all participating rockets are designed to fly to. “They’re going to collect how much solar power is in the rocket in the air.”

As adviser to one of the invited teams, Nicholson attended a training this summer on participating in the Student Launch. NASA also requires teams to connect with a local mentor who is involved in amateur rocketry. But the students came up with their proposal to use solar panels on the rocket and collect the data after brainstorming ideas. They go through four phases in completing the project: preliminary design review, critical design review, flight readiness review and launch readiness review — a process “which imitates a real NASA project,” said Nicholson.

To read the entire article, please visit this direct link to The Courier's feature story...