The approval to proceed to the EMD phase follows the Department of Defense’s Milestone B approval in October of 2018. During the EMD phase, Northrop Grumman will develop the critical hardware and software design for the EGI-M, build hardware for integration and qualification, generate safety and civil certification documentation, qualify the new EGI-M systems to rigorous military standards, and build production units for platform testing. 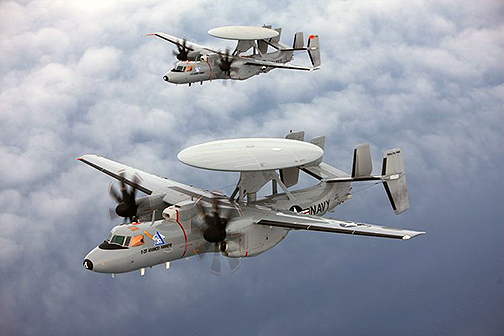 The E-2D is one of the lead platforms selected for EGI-M integration. Photo is courtesy of the U.S. Navy.

Based upon modular and truly open systems architecture, the EGI-M system will support the rapid insertion of new capabilities and adaptability based on unique platform requirements. Additionally, the modernized navigation system will incorporate new generation GPS receivers, which will be capable to securely and accurately transmit the new military signals for space (M-Code). The EGI-M will be integrated into multiple platforms across all of the services and exportable versions will be developed for international customers. The lead platforms for EGI-M are F-22 and E-2D.

EGI-M technology is designed for compatibility with current systems on legacy aircraft, allowing ease of integration and rapid adoption of new capabilities. EGI-M will also comply with the Federal Aviation Administration’s NextGen air traffic control requirements that aircraft flying at higher altitudes be equipped with Automatic Dependent Surveillance-Broadcast (ADSâ€‘B) Out by January of 2020. ADS-B Out transmits information about an aircraft’s altitude, speed and location to ground stations and to other equipped aircraft in the vicinity.