Weather forecasters now officially have a new tool in their arsenal, as the first satellite in NOAA’s new Joint Polar Satellite System has passed rigorous testing and is now operational.

Launched last November as JPSS-1, and renamed NOAA-20 once it reached orbit, the satellite features the latest and best technology NOAA has ever flown in a polar orbit to capture more precise observations of the world’s atmosphere, land and waters. Data from the satellite’s advanced instruments will help improve the accuracy of 3-to-7 day forecasts. 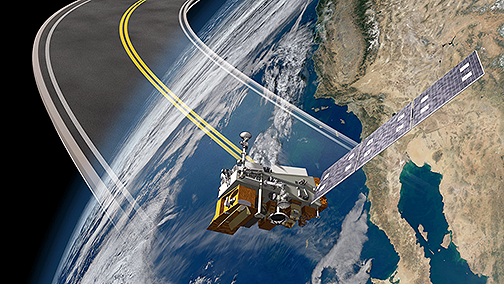 Artistic rendition of the NOAA-20 satellite.

NOAA-20 provides NOAA’s National Weather Service with global data for numerical weather prediction models used to develop timely and accurate U.S. weather forecasts. In addition, high-resolution imagery from the satellite’s Visible Infrared Imaging Radiometer Suite, known as VIIRS, will enable the satellite to detect fog, sea-ice formation and breaking in the Arctic, volcanic eruptions and wildfires in their very early stages. This advanced modeling and imagery information, shared with international and governmental partners, will help businesses, the emergency preparedness and response communities and individuals make the best decisions possible in the face of weather-related hazards. 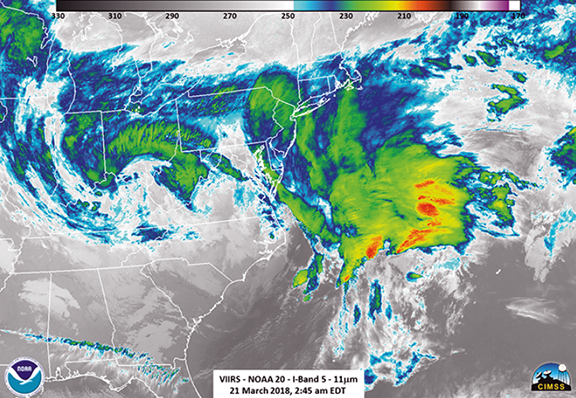 NOAA-20 caught this image of the fourth Nor'easter to batter the East Coast during the past winter on March 21.

Image is courtesy of NOAA.

NOAA-20 joins Suomi NPP — the NOAA-NASA demonstration satellite launched in 2011 — giving the U.S. the benefit of two sophisticated spacecraft in nearly the same orbit. Each circles the Earth in a polar orbit 14 times a day, collecting global observations that form the basis for U.S. weather prediction.

JPSS-2, the second in the series, is scheduled to be launched in 2021, followed by JPSS-3 in 2026 and JPSS-4 in 2031. JPSS satellites are designed to operate for seven years, with the potential for several more years. The JPSS mission will deliver its critical data and information for at least the next two decades to support a Weather-Ready Nation.

Neil Jacobs, Ph.D., Assistant Secretary of Commerce for Environmental Observation and Prediction, added that NOAA-20 is especially beneficial for tracking developing storms in the Arctic, Alaska and Antarctica. Forecasts for these remote regions are critical for the U.S. fishing, energy, transportation and recreation industries, which operate in some of the harshest conditions on the planet.