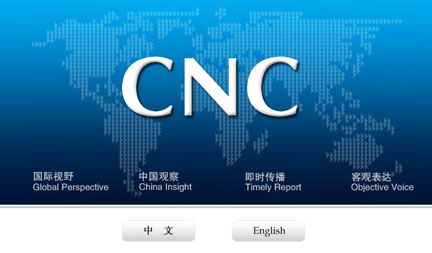 CNC website home...
The CNC English service, channel 167 on Galaxy-19, is broadcast via Ku-band without encryption and the signals are clear and smooth, according to the CNC service's monitoring sites across North America. Since its launch on July 1, the CNC English service, CNC World News, has broadcast English news programs 24 hours a day, covering breaking news and major political, economic and cultural news around the globe. Users can also have access to the English broadcast of China's Xinhua News Agency on xhstv.com and on mobile phones of China Mobile, China Unicom and China Telecom.

Xinhua's TV services include satellite TV channels, cross-border City Cable TV channels, and multiple TV service transmission lines targeted at TV stations both at home and abroad. Currently, the Xinhua TV channels broadcast an average of 2,000 minutes of news programs each day, providing the longest hours of TV news services among the world's media organizations. By launching video news services, Xinhua made a big step in its transformation from a text-and-photo-based news agency to a multimedia empire. Xinhua is now rolling out a new program aimed at adjusting the functions of its overseas arms to enhance the localization of its products, and the video news service is one of the priorities of the program.