[SatNews] In what is becoming an increasingly familiar sight at the Spaceport, another Soyuz... 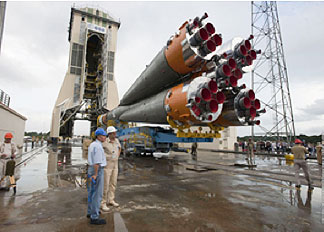 The transporter/erector rail car moves onto the massive concrete launch pad with its Soyuz launcher after passing underneath the mobile service gantry during the rollout.
....is now erected on the launch pad and ready to receive its multi-passenger payload for Arianespace’s Friday night mission from French Guiana. This vehicle – which is currently composed of the integrated first, second and third stages – rolled out of its MIK assembly facility using the same horizontal transfer process employed for 1,780 other Soyuz flights performed with the workhorse medium-lift launcher.  The Soyuz was then raised to its vertical position over the massive concrete launch pad, and suspended in place by a system of four support arms. All is ready for the final launch campaign steps that are specific to the Russian-built vehicle’s operations in French Guiana: the integration of its “upper composite” containing the mission’s six satellite passengers, the Fregat upper stage and the ST-type payload fairing; which will be performed inside a purpose-built mobile service gantry.

This no. 2 Soyuz flight from the Spaceport will orbit the French Pléiades 1 and Chilean SSOT Earth observation satellites (both developed for civilian and defense image-gathering); along with four French Elisa micro-satellite demonstrators for defense-related electronic intelligence gathering.  These payloads were integrated last week in the Spaceport’s S3B clean room, with the combined six-spacecraft cluster installed atop Soyuz’ Fregat upper stage using a dispenser system developed for Arianespace, followed by their encapsulation in the ST-type payload fairing. The December 16 launch is scheduled for a precise liftoff at 11:03:08 p.m. (local time in French Guiana) and will deliver the payloads into circular orbits inclined 98 deg.  Payload lift performance for the Soyuz is calculated at 2,191 kg., which includes approximately 1,400 kg. for the Pleiades 1, ELISA and SSOT satellites, along with the mass of the payload dispenser and integration hardware.

Soyuz is shown suspended over the launch pad after being raised to the vertical position by its transporter/erector rail car. At left is the Spaceport’s purpose-built 52-meter-tall mobile gantry, which moves forward to provide a protective environment for integration of the launcher’s upper composite containing the Fregat upper stage, the mission’s six satellite passengers and the payload fairing.
Photo courtesy of Arianespace.
Topical Tags :
New Products
Launch
Satellite Operator
Service Provider
Regional Tags :
Europe
South/Central America