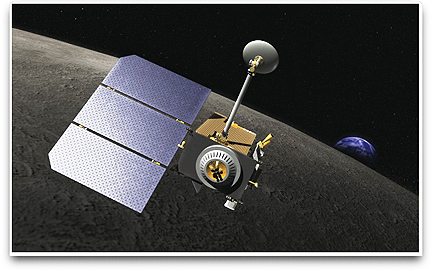 After a four and a half day journey from the Earth, the Lunar Reconnaissance Orbiter, or LRO, has successfully entered orbit around the moon.

Engineers at NASA's Goddard Space Flight Center in Greenbelt, Maryland, confirmed the spacecraft's lunar orbit insertion at 6:27 a.m. EDT Tuesday. During transit to the moon, engineers performed a mid-course correction to get the spacecraft in the proper position to reach its lunar destination. Since the moon is always moving, the spacecraft shot for a target point ahead of the moon. When close to the moon, LRO used its rocket motor to slow down until the gravity of the moon caught the spacecraft in lunar orbit. A series of four engine burns over the next four days will put the satellite into its commissioning phase orbit. During the commissioning phase, each of the LRO's seven instruments is checked out and brought online. The commissioning phase will end approximately 60 days after launch, when LRO will use its engines to transition to its primary mission orbit. For its primary mission, LRO will orbit above the moon at about 31 miles, or 50 kilometers, for one year. The spacecraft's instruments will help scientists compile high resolution, 3D maps of the lunar surface and also survey it at many spectral wavelengths. The satellite will explore the moon's deepest craters, examining permanently sunlit and shadowed regions, and provide understanding of the effects of lunar radiation on humans. LRO will return more data about the moon than any previous mission.