The two missile defense satellites, built by Northrop Grumman Corporation (NYSE:NOC) as the prime contractor and Raytheon Company (NYSE:RTN) as the sensor payload provider, observed an Aegis test October 6th involving two missile launches within hours of each other from the Pacific Missile Range Facility, Hawaii. This Aegis test event showed the ability of STSS to view a dim medium-range missile, observe the target with both tracking sensors through booster burnout, and continue to observe the spent booster well into the post-boost midcourse phase. Both STSS satellites transmitted tracking data to the Enterprise Sensors Lab (ESL) at the Missile Defense Integration and Operations Center at Schriever Air Force Base, Colorado, where the information was processed and fused with data from other sensor assets, to form a stereo track of the target vehicle. 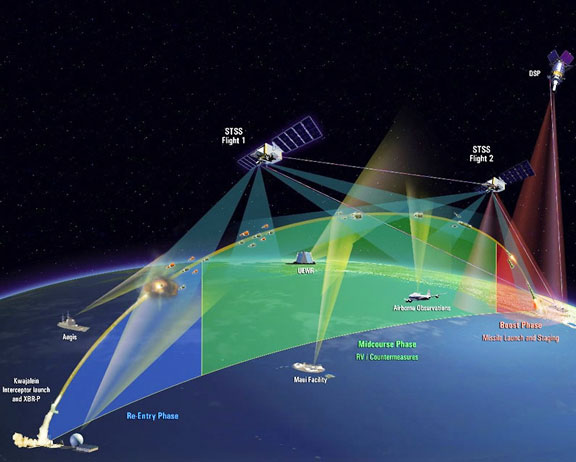 "The ability to form a stereo track from STSS sensor data is a significant precursor to demonstrating the ability to support an Aegis Launch on Remote capability," said Doug Young, vice president of missile defense and missile warning programs for the Northrop Grumman Aerospace Systems sector. He noted that the STSS satellites are scheduled to participate in future Aegis test events to demonstrate that their stereo track accuracy is sufficient to enable a successful Aegis launch on remote intercept of a target missile.