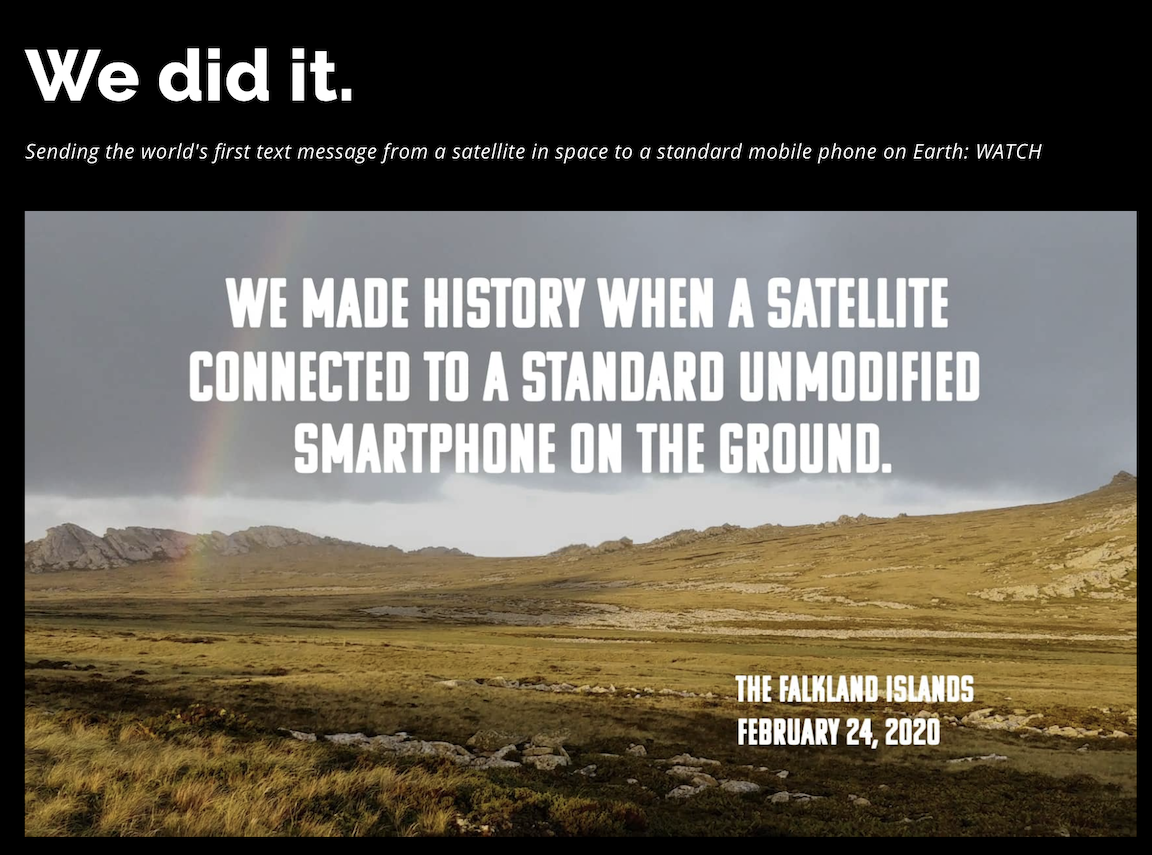 Lynk (Lynk Global, Inc.) has successfully connected a satellite in LEO to an ordinary mobile phone on Earth.

The technical breakthrough enabled Lynk to send the world’s first ever text message from space to a mobile phone. This milestone, witnessed by independent third-party observers, represents the critical, industry-first next step for Lynk’s vision to use satellites to provide broadband services directly to more than five billion mobile phones on the planet, everywhere.

A video recording of this history-making event can be found at this direct link...

This milestone is the culmination of over a year of satellite-to-phone-on-the-ground testing involving multiple payloads in space.

Tyghe Speidel, Co-founder and VP of Technology of Lynk and the inventor of the core breakthrough technology, stated,  that this is a critical verification of the company's revolutionary radio access network technology’s ability to compensate for the effects of placing the cell tower in orbit, which mobile standards were not designed to accommodate.

This breakthrough represents a key step in advancing Lynk’s vision to provide universal broadband connectivity to the over five billion people who have mobile phones but cannot access wireless signals everywhere. Lynk has solved what was widely considered an impossible problem in a one trillion-dollar-a-year global industry — how to provide connectivity to mobile phones across the planet, when it is cost-prohibitive to build and operate cell towers everywhere, especially in less populated areas. Lynk's technology solves this problem of providing mobile broadband coverage everywhere on Earth, a $300-400 billion a year opportunity.

Charles Miller, Co-Founder and CEO of Lynk, noted that in collaboration with nearly 30 mobile network operator partners, Lynk is actively working to deploy the first commercial product. With the permission of regulators, Lynk is confident that the company can bring a world-first solution to the market to tens-of-millions of people by the end of 2020. This is a game changer for the billions of people who own a mobile phone, for the billions who do not have affordable connectivity, and for the entire mobile communications industry. Lynk makes the impossible possible. In the near future, you will stay connected everywhere — all the time.

The successful tests also prove that Lynk’s Everyone Everywhere Emergency alerts are feasible using Lynk’s orbiting satellites. The startup’s now proven technology will enable people everywhere to get potentially life-saving alerts — from the farthest parts of the ocean, to rural areas, and to the most remote islands — of impending natural disasters, such as hurricanes, wildfires, and tsunamis. Lynk’s breakthrough will provide emergency responders with assured mission-critical communications during natural disasters when traditional ground-based cellular networks are down.

Steve Case, the Co-Founder of AOL and Chairman and CEO of the DC-based investment firm Revolution (an investor in Lynk via Revolution’s Rise of the Rest Seed Fund), added that connectivity changes lives and saves lives. Lynk’s successful test brings the company one step closer to providing the 2+ billion people around the world who live and work in rural communities with affordable connectivity and the immeasurable social and economic benefits that come with it.

Mark Foster, the inventor of cell phone number portability and a Founding Partner at Blazar Ventures, an investor in Lynk, added that the company is proud of Lynk’s revolutionary and industry-transformative accomplishment. Lynk will touch the lives of billions – by connecting directly to their standard mobile phones from satellites in orbit – and provide a desperately needed alternative to conventional terrestrial towers for mobile network operators to extend coverage everywhere. Lynk’s rapid prototyping and innovative space access strategies are a key part of their success, and Blazar Ventures looks forward to Lynk’s introduction of the world’s-first satellite-to-standard mobile phone service to tens-of-millions of people by the end of 2020.

Lynk has already launched its fourth “cell tower in space” spacecraft on the SpaceX’s CRS-20 mission on March 6th. This spacecraft, which is named Lynk The World, will allow the company to expand testing in the Summer of 2020 to additional countries and partners.