The site will use a combination of lasers and sensitive optical systems such as those found in telescopes to detect, track and characterize man-made debris objects. Electro-optical technologies that can zoom in on specific objects form a strong complement to radar-based systems like the U.S. Air Force's Space Fence, which will sweep the sky and track 200,000 objects. Drawing on advanced sensors and software, the new site will focus on specific objects and determine how fast they're moving, what direction they're spinning, and what they're made of.

"Ground-based space situational awareness is a growing priority for government and commercial organizations around the world that need to protect their investments in space," said Rick Ambrose, executive vice president, Lockheed Martin Space Systems. "Through this agreement with Electro Optic Systems, we'll offer customers a clearer picture of the objects that could endanger their satellites, and do so with great precision and cost-effectiveness." 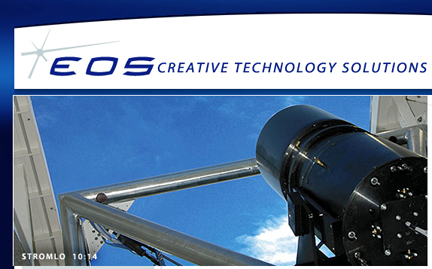 "The partnership with Lockheed Martin will help both organizations establish a global network of space sensors, while simultaneously increasing the market reach of the partners' data and services," said Electro Optic Systems Chief Executive Officer Ben Greene. "We consider the strategic partnership with Lockheed Martin a major step towards the achievement of critical mass of sensors, data and services, all of which are critical in providing detailed yet easily usable information on space debris."

Electro Optic Systems develops and produces a wide range of space-related technologies including telescopes and beam directors. They are among the largest producers of major optical telescopes in the world, and currently operate the Space Research Centre, a satellite laser ranging and debris tracking facility, at Mt. Stromlo in the Australian Capital Territory.

Electro Optic Systems information may be found at http://www.eos-aus.com/