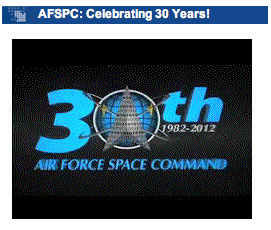 [SatNews] “The foundational capabilities space and cyber bring to the defense of this Nation must be protected.”

As a consequence of the pending sequestration, Air Force Space Command conducted detailed planning and is now readying for significant cuts and reductions.

"This budget situation is unprecedented in my 36 years of service," said General William L. Shelton, Commander, Air Force Space Command.  "With no appropriation bill for fiscal year 2013, our ability to plan for FY14 and 15 is even more uncertain."

"What I am absolutely certain of, however," said General Shelton, "is that the foundational capabilities space and cyber bring to the defense of this Nation must be protected.  Not only protected, but as Deputy Secretary of Defense Carter said recently, to support our new strategy, we must also enhance those areas, making substantial advances and investments in space and cyber."

General Shelton added, "Given the current budget environment, reductions are unavoidable, but space and cyber systems have less flexibility to reduce operations tempo as most of our weapon systems must operate continuously to accomplish the assigned missions for the Nation."

Air Force Space Command recently provided the Air Force Deputy Assistant Secretary for Budget actions it would be forced to take should sequestration occur on 1 March, 2013.