Being a prepared pilot for various situations is critical. To ensure that pilots can manage in complex scenarios, Metis Technology Solutions of Albuquerque, New Mexico, has devised an autonomous flight deck technology. 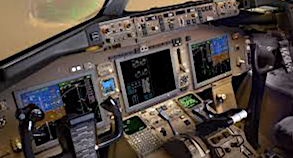 This phase three funding underscores the success of SBIR program, and brings new architectures to NASA System-Wide Safety Office through integration with flight training environments. The company has been recognized as one of the fastest growing technology companies in New Mexico for three years in a row, has received more than 30 NASA Achievement Awards and was named NASA Small Business of the Year in 2017.

Under the NASA program, Metis developed the Intelligent Information Processing System (IIPS) which applies intelligent rules to exploit multiple data sources and provide best course of action recommendations. The software architecture is designed to analyze combined data for safety and situational relevance and apply priorities with an immediacy that can be quickly and intuitively processed by a flight crew.

In the near term, IIPS will be used in flight simulators and pilot training. With further development it also has a role in aerospace safety applications, and in support of autonomous vehicle operation.

James Theiss, Metis Vice President of Space Programs said that advancing to the next phase of funding for their software architecture development is a great endorsement of their success in bringing innovation to NASA’s training and safety programs. The highly competitive SBIR programs serve the dual purpose of bringing creative new technologies to U.S. government missions and reinforcing the development of commercial products by entrepreneurial organizations such as Metis.

For flight training, or real-world aerospace applications, when a situation becomes increasingly critical, IIPS prioritizes, filters, and presents information in a form that permits rapid assessment and action. If the expected action is not taken, information processing is continuously updated and modified until the situation is resolved.

Prototype implementations of IIPS have been tested at the Wright-Patterson Air Force Base Kraken flight simulator and at the Visual Imaging Simulator for Transport Aircraft Systems (VISTAS) laboratory at NASA Langley Research Center. At the VISTAS simulator, it was integrated with aircraft instrument simulations, and included data from eye movement tracking in a virtual cockpit.

Richard Jessop, Metis IIPS Principal Investigator. added that the goal of the phase three development is to make IIPS useful as an enhanced pilot training tool for commercial and military training programs. Future developments will include the use of Artificial Intelligence and ultimately, installation on commercial airliners and other flight or space vehicles as an effective precaution in breaking the kind of error chains that lead to failures and life-threatening disasters.

In addition to its work on software architectures such as IIPS, Metis delivers space mission support and other software development for federal agencies including NASA and the U.S. Department of Defense.