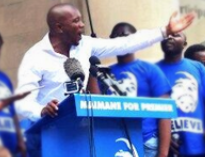 Jacob Gedleyihlekisa Zuma, GCB is the President of South Africa.

“The unfolding fiasco that is engulfing the digital TV migration process since Cabinet’s approval of the Broadcast Digital Migration policy on March 4th has serious repercussions for a credible set-top-box production and delivery process and our nation’s desperate need to bridge the digital divide,” Shinn said.

She has co-written a letter (with shadow Communications minister Gavin Davis) demanding an urgent meeting to explain the recent changes in government policy regarding the adoption of digital TV, and the impact on the digital migration policy.

There has been considerable criticism of the costs associated with receiving free-to-air TV signals, and the government’s plan to subsidise set-top box production for the 5 million poorest members of the community.