[SatNews] Scotland's first space satellite has been launched into orbit —UKube-1, designed and manufactured by Clyde Space in Glasgow, was rocketed into space aboard a Russian Soyuz-2 rocket, one of eight payloads pushed into space from the Kazakhstan launch site in Russia, at 5:00 p.m. United Kingdom time.

There was a great deal of cheering at the Glasgow HQ of Clyde Space as the launch unfolded before them. The UKube-1 nanosatellite is about the size of a shoe box and is described by Clyde Space as being one of the most advanced of its kind, featuring GPS devices aimed at measuring plasmaspheric space weather, as well as a camera that will take images of the Earth and test the effects of radiation on space hardware. UKube-1 will orbit at 635 kilometers above Earth, and has an expected life span of five years, although its primary mission is expected to be completed within one year." 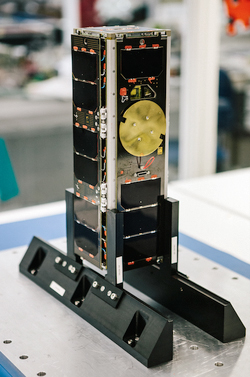 Photo of the UKube-1 cubesat.

Photo is courtesy of Clyde Space.

Clyde Space chief executive Craig Clark said it is a very proud moment for the team. "I am delighted that the launch went so smoothly and the UKube-1 mission is underway. It is fantastic that a spacecraft designed, built and tested in Scotland by a Scottish company has been so successful and I’d like to thank everyone who backed us and contributed to this amazing project."

Andrew Strain, vice-president of engineering at Clyde Space, recently returned from Baikonur where he supervised the integration of UKube-1 on to the rocket. He said, "UKube-1 shipped out six months ago so our first task was to make sure everything was still healthy. The beauty of the CubeSat is that at the launch site we were able to set up the test kit and do all the checkouts within a few hours, confirming we were good to go. Once that was done all that remained was to bolt the satellite to the launcher and wait for the launch."

Ukube-1, part of the UK's national collaborative CubeSat program, will test several new technologies in space. The payloads flying on UKube-1 were selected following a competition administered by the UK Space Agency to find the most innovative and creative payloads in the UK for a CubeSat. The competition received more than 20 payload submissions, several of which are also being considered for future missions.

Also onboard the Clyde Space satellite is an advanced On-Board Computer (OBC) from Steepest Ascent in Glasgow, Scotland, and an S-band Transmitter from Cape Peninsula University of Technology. UKube-1 is essentially a technology demonstration mission and most of the payloads on UKube-1 are already being used on other CubeSat missions around the world. 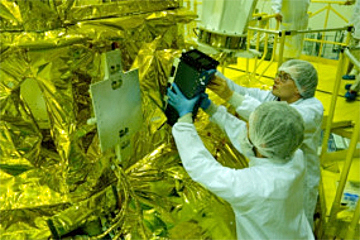 The UKube-1 satellite being prepared for launch by Clyde Space engineers.

Photo is courtesy of Clyde Space.

Clyde Space took on the role as “platform prime” for the build and development of UKube-1 and it was the company's responsibility to deliver the complete mission for the UK Space Agency, from concept to delivery to the launch site.  The majority of the design and system integration took place at the company's high-tech facility in the West of Scotland Science Park. UKube-1 consists of a combination of standard off the shelf subsystems from Clyde Space' CubeSat Lab, modifications to standard subsystems and new products. The company provided an interface emulator to all payload teams at the start of the program. This allowed the rapid parallel development of subsystems —payloads  that could be developed and tested without the need to interface to the spacecraft platform. Both the payload and the platform could, therefore, be developed simultaneously. This will be beneficial for other missions in future and the product is currently for sale in the Clyde Space cubesat shop.

On-Board software was developed for UKube-1 in collaboration with Bright Ascension. The software was designed for the command and data handling needs of the next generation of highly capable cubesats and is also available to purchase for use on other spacecraft and can be easily supplemented with new components and payloads when necessary to suit various mission configurations.

The deployable solar panels have more features than ever before, as they were built to support the large amount of power required for a multi-payload mission, with the company able to improve and test a more integrated solar panel that would supply power and interface sensors and actuators to the ADCS. This included the use of sun detectors and sun sensors as well as embedded magnetorquers.  Additionally, the solar panels accommodated S-band patch antenna and a GPS antenna.

Supporting the power delivery from the new deployable solar panels required an updated EPS. The design was extended to enable it to handle the increased power from the panels and to deliver more power to the payloads and subsystems. Modularity of the system was improved by increasing the number of arrays that can be interfaced. The isolation switch was re-configured to reduce the risk of high currents being carried in physical switches which has, in turn, reduced the magnetic impact of the system (e.g., the resultant magnetic force from currents running through harnessing). Also increased was the number of regulated power buses to accommodate the needs of all the payloads.

The S-Band transmitter used on UKube-1 offers the highest data rate for downlink of any others on the market at the moment and was developed in collaboration with CPUT and FSATI and is increasingly important as cubesats become more complex.

Craig Clark added, "UKube-1 has been years in the making, with a great deal of hard work from our fantastic Clyde Space team. As anyone in the business will tell you, there's nothing easy about designing a spacecraft, especially one as complex as UKube-1, so the achievement is a testament to the capability and application of the team here. It has also been a dream for me, to be responsible for producing Scotland's first satellite. I'm very proud of UKube-1. But we're not stopping there. This is the first of many, and by that I mean hundreds of satellites of this size to be produced in Glasgow in the coming years."

The Clyde Space infosite is located at http://www.clyde-space.com/