Mars Orbiter Is Safe But Rather Sedentary 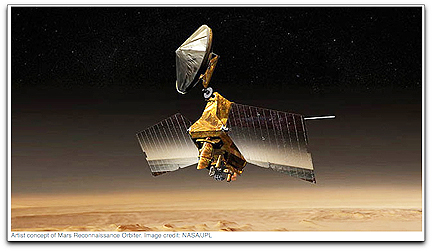 NASA's Mars Reconnaissance Orbiter has placed itself into a safe mode as of Wednesday morning, Aug. 26, for the fourth time this year, while maintaining spacecraft health and communications. While in safe mode, the spacecraft has limited activities pending further instructions from ground controllers. Engineers have begun the process of diagnosing the problem prior to restoring the orbiter to normal science operations, a process that is expected to take several days. They will watch for engineering data from the spacecraft that might aid in identifying the cause of event and possibly of previous ones. The orbiter spontaneously rebooted its computer Wednesday, as it did in February and June, but did not switch to a redundant computer, as it did in early August. To assist in investigating a root cause of the three previous anomalies, engineers had programmed the spacecraft to frequently record engineering data onto non-volatile memory. That could give an improved record of spacecraft events leading up to the reboot. The spacecraft has been investigating Mars with six science instruments since it reached that planet in 2006. It has returned more data than all other current and past Mars missions combined.